Between comments left on my site and the articles that I have read, I have literally not seen one Muslim show an once of concern for the life of 17 year-old apostate of Islam Rifqa Bary.

Even the Arab News has decided to attack her and try to provide a smokescreen for the Noor Islamic Cultural Center in Ohio. As usual Muslims will say anything to defend Islam.

COLUMBUS, Ohio: At only age 17, Fathima Rifqa Bary has already managed to create one of the most controversial national news stories in the United States. Her heinous allegations have tried to give Islam a bad name and taint the reputation of Noor Islamic Cultural Center (NICC), one of the most prominent mosques of Columbus, Ohio.

Here is what the Arab News conveniently did not tell you.

Hat tip to our friends @ My Pet Jawa.

An openly declared Christian on Facebook, Bary corresponded with Florida pastor Blake Lorenz of the Global Revolution Church in Orlando. Accepting his offer of help, she boarded a Greyhound bus and fled to the pastor’s home.

In the up coming paragraph, we see the usual Muslim victim card and that America Muslims have no problem attending Mosques, conferences and rallies of hate.

When contacted by Arab News, an NICC official, who wished to remain anonymous, said: “This is nothing new, right-wing Christians have always attacked active mosques. Noor is a very prominent mosque. It caters to 10,000 Muslims in central Ohio. We have very successful interfaith programs. We have prominent visitors like congressmen, and the president of Bangladesh visited us. We have even been invited to the White House.”

Here is where leftist Rev. Tim Ahrens, steps in and defends a religion that has been persecuting Christians for centuries.

Members of other faith groups have also supported NICC. Talking to Arab News, at a recent event, Rev. Tim Ahrens said that he was ashamed by the accusations of pastor Lorenz. That it was not based on Jesus’ teachings. “It is not news but a smear campaign. I have known Hani Saqr for the last 20 years. I am ashamed to see people smear Noor. We stand with you shoulder to shoulder. This center has blessed central Ohio.” 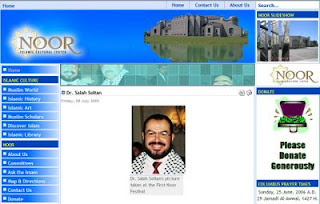 Hat tip on picture to Ohio Against Terror.

Ahrens also said people made statements against Islam and NICC because of “fear and hate and lack of knowledge. That it is coming from elements who call themselves Christians is troubling to me as it does not reflect the values of Christ. I have only ever found graciousness and kindness in my dealings with Muslims."

Does Rev. Ahrens actually know anything about Islam, like what Islam says about the return of Jesus? Apparently not and on top of that, he does not even have the courage to say a word about the death threat to Rifqa Bary. What a disgrace.
Posted by Christopher Logan at 9:03 AM