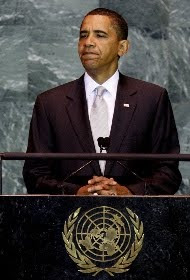 Once again we just how upside down the world is today. Just yesterday it was revealed that Iran will ask for nuclear fuel at a UN meeting next week. Today King of the UN Obama, is claiming that all countries will be giving up their nuclear weapons. Has anyone over there been paying attention to the fact that Iran is getting closer to having nuclear weapons, and their threats to Israel? Of course they have, they just do not care.

The resolution calls for stepped up efforts to prevent the spread of nuclear weapons, promote disarmament and "reduce the risk of nuclear terrorism."

It was only the fifth time the Security Council met at summit level since the U.N.
was founded in 1945. And Obama was the first American president to preside over a Security Council summit, gaveling the meeting into session and announcing that "the draft resolution has been adopted unanimously."

"The historic resolution we just adopted enshrines our shared commitment to a goal of a world without nuclear weapons," Obama said immediately after the vote. "And it brings Security Council agreement on a broad framework for action to reduce nuclear dangers as we work toward that goal."

Just one nuclear weapon set off in a major city could cause major destruction, Obama said.

He said the global effort would seek to "lock down all vulnerable nuclear materials within four years."

"This is not about singling out an individual nation," he said. "International law is not an empty promise, and treaties must be enforced."

"We will leave this meeting with renewed determination," Obama said.