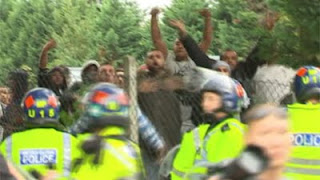 Today Stop the Islamisation of Europe (SIOE) was supposed have to an 911 anti-Islam rally outside the North London Harrow Central Mosque. They had planned a peaceful protest, but of course earlier in the day 100's Muslims had showed up and as usual started trouble.

Instead of laying down the law and showing the Muslim protesters who called the shots, the police forced SIOE to cancel the rally. A senior sergeant said "he does not want any of his men killed." The cowardly police even arrested SIOE leader Stephen Gash, to "prevent a breach of peace".The UK police have given up without a fight.


Ten people have been arrested during a demonstration outside a mosque in north-west London where an anti-Islamic protest was planned.

At least 1,000 people gathered outside Harrow Central Mosque as activists from Stop Islamification of Europe planned to demonstrate outside the mosque.

Unite Against Fascism were also present to "defend the mosque", they said.

Bricks, bottles and firecrackers were thrown at police officers who were present in riot gear at the scene.

Just after 2000 BST, police said there were a small number of people in the area. Mobile patrols were continuing in a bid to reassure residents.

Earlier, hundreds of youths, some covering their faces with scarves, were in the area and there were skirmishes with police as some demonstrators broke a police cordon.

Supt Julia Pendry said police had to "intervene" to stop things from "escalating".

She said: "Officers came under attack from bricks and bottles and we had to deploy our staff in protective equipment a number of times.

"Police had to take fast-time action to stop events from getting even worse this afternoon, by intervening to prevent an imminent breach of the peace.

"What played out on the streets of Harrow today is completely unacceptable to everyone," she added. 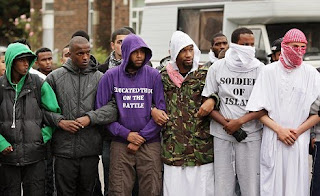 Stop Islamification of Europe (SIOE) said they planned a "peaceful protest" against the building of a five-storey mosque next to the Harrow Central Mosque.

But in a message on their website SIOE said the protest had been called off and organiser Stephen Gash had been arrested.

The posting read: "If you are on your way to the demo, don't go, it's being called off right now.

"The police can't handle the Muslim counter-demonstrators. The senior sergeant said that he doesn't want any of his policemen killed." 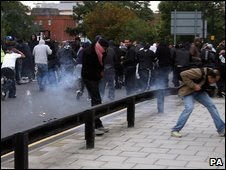 Well, it doesn't surprise me about the UK and their absolute fear of protecting their own. What we all don't realize is that these are the military arm of the Muslim Brotherhood and the military needs to be called out to stop this sort of ilk.

If our government politicians would read the doc that the FBI released in the Holy Land Foundation trial they would find that the Muslim Brotherhood is behind this, and these muslims are their military. but, our politicians run on 'stupid' and especially in the UK. If there is another Churchill - he probably got barred from entering his own homeland since that is the UK's strategy in dealing with anyone who speaks ill of these islamofaschists.

The same mindset is right here in the USA. The press and the police view those who stand up for our Constitution against Sharia law as the bad guys. I have nothing but respect for the police but their mindset is unsettling.

There seems to be widespread trouble and unrest here in the UK from the right wing groups and clashes with Muslims.
The bubbling under of trouble and resentment at the bulding of the so called super mosque in London has grown to fever pitch and what we are seeing is the start of the civil unrest that is to come.
As someone just returning from America I see no difference in our situations, we are both facing one and the same.
Margaret

The problem is here in America as well, it is just not as bad yet. But it wouldn't long until things get worse. They are emboldened with Obama in office.

Yes, leave us alone and keep us safe from Islam

You too Radio Jihad.

If I recall correctly, in Denmark the biker gangs are taking on the Muslim cockroaches.