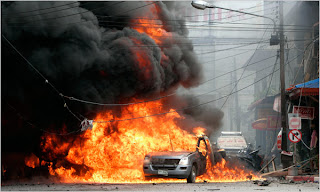 Continually we see most of the world coming up with ridiculous excuses for the actions of Muslims. Like blaming it all on Israel or the USA. Yet today Thailand has been hit with its second Islamic bomb blast in less than two weeks. The problem is not America or Israel, it is Islam!

A vehicle burned after a bomb attack in Thailand's Yala province, south of Bangkok, on Friday.
Picture by Surapan Boonthanom/Reuters

PAKA LUE SONG, Thailand — The soldiers patrolling this hamlet racked by insurgent violence measure their progress modestly: two years ago, when villagers saw them coming, they closed their shutters. Now, they say, most residents peer out of their wood-frame houses and offer strained smiles.

“The local people have started to open their hearts,” said Capt. Niran Chaisalih, the leader of a government paramilitary force garrisoned at the village school.

Paka Lue Song, only a 15-minute drive from the provincial capital, Pattani, is a starting point for Thailand’s influx of troops into the country’s troubled southern provinces, where ethnic Malay Muslims are battling for autonomy from Thailand’s Buddhist majority.

The number of people in security forces, including the army, the police and militias, in the region has doubled over the past two years to about 60,000, said Srisompob Jitpiromsri, a leading expert on the insurgency and the associate dean at Prince of Songkla University in Pattani.

The huge increase in security forces initially helped reduce the violence as well as the death toll, which fell by 40 percent last year. But the number of killings has risen in recent months. More than 330 people have been killed so far this year, compared with 285 in the same period last year. Among the dead are civilians — including many Malays — soldiers and insurgents.

There have been so many killings in the three southern provinces — about 3,500 since 2004 — that the government began distributing a glossy brochure last year guiding victims’ families through the process of applying for government compensation.

Although the insurgency has been active for decades in the south, the current phase is considered particularly dangerous because the militants appear to have more of an Islamist agenda and because apparently sectarian attacks have strained the mutual tolerance between Buddhists and Muslims. It also comes at a time of deep political turmoil and social unease in Thailand that has hobbled several governments in the last three years and last year drove away many of the tourists who help sustain the country’s economy.

Link to Article
Posted by Christopher Logan at 8:01 PM

I hope everything will be fine next year :) Getting my hopes high