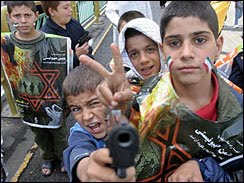 Iranians hit the streets to today for two different protests. One against their own government, and one against Israel. Unfortunately the protests against Israel were much larger.

The opposition held its first major street protests since mid-July, with marchers decked out in green — the reform movement's color — waving V-for-victory signs on major boulevards in the capital.

In some cases on several blocks away, larger crowds marched in government-sponsored rallies marking an annual anti-Israel commemoration, waving pictures of Iran's supreme leader and president and placards denouncing the Jewish state.

The commemoration, known as Quds Day, is a major political occasion for the government — a day for it to show its anti-Israeli credentials and its support for the Palestinians. Quds is the Arabic word for Jerusalem. During a speech for the rallies, President Mahmoud Ahmadinejad railed against Israel and the West, questioning whether the Holocaust occurred and calling it a pretext for occupying Arab land.

But the opposition was determined to turn the day into a show of its survival and continued strength despite a fierce three-month-old crackdown against it since the disputed June 12 presidential election.

Top opposition leaders joined the protests, in direct defiance of commands by Supreme Leader Ayatollah Ali Khamenei, who barred anti-government demonstrations on Quds Day. That could provoke an escalation in the crackdown: hard-line clerics have been demanding the past week that any leader backing the protests should be arrested.

Several tens of thousands joined the opposition marches, witnesses said — far smaller than the masses that turned out in the Quds Day rallies, which were helped by government organizing. Police and security forces, along with pro-government Basij militiamen, fanned out along main squares and avenues and in many cases tried to keep nearby opposition protesters away from the Quds Day rallies to prevent clashes, witnesses said.

Others chanted, "Not Gaza, not Lebanon — our life is for Iran" — a slogan directly challenging the government's support for anti-Israeli Palestinian militants in Gaza and Lebanon's Hezbollah guerrilla. Some shouted for Ahmadinejad's government to resign. Some women marched with their children in tow.

But at one of the several opposition rallies around the city, a group of hard-liners pushed through the crowd and attacked former President Mohamad Khatami, a cleric who is one of the most prominent pro-reform figures, according to a reformist Web site. The report cited witnesses as saying the opposition activists rescued Khatami and quickly repelled the assailants.

Link to Article
Posted by Christopher Logan at 10:47 AM