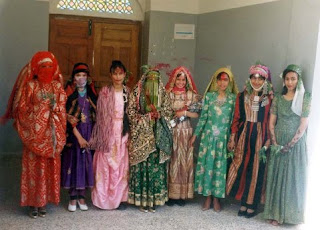 This heart-wrenching story comes out of Yemen, but unfortunately the issue of child brides is very common in the Islamic world. They are even on the rise in the UK.

What makes matters even worse is that Islam allows pedophilia, as Mohammad himself was a pedophile. Mohammad's third wife Aisha was just a little girl herself.

Narrated Aisha: "The Prophet engaged me when I was a girl of six (years). We went to Medina and stayed at the home of Bani-al-Harith bin Khazraj. Then I got ill and my hair fell down. Later on my hair grew (again) and my mother, Um Ruman, came to me while I was playing in a swing with some of my girl friends. She called me, and I went to her, not knowing what she wanted to do to me. She caught me by the hand and made me stand at the door of the house. I was breathless then, and when my breathing became Alright, she took some water and rubbed my face and head with it. Then she took me into the house. There in the house I saw some Ansari women who said, "Best wishes and Allah's Blessing and a good luck." Then she entrusted me to them and they prepared me (for the marriage). Unexpectedly Allah's Apostle came to me in the forenoon and my mother handed me over to him, and at that time I was a girl of nine years of age.

Lets not forget that Mohammad was considered the perfect human. Al-Insān al-Kāmil.

Fawziya Abdullah Youssef died of severe bleeding on Friday while giving birth to a stillborn in the al-Zahra district hospital of Hodeida province, 140 miles (223 kilometers) west of the capital San'a.

Child marriages are widespread in Yemen, the Arab world's poorest country, where tribal customs dominate society. More than a quarter of the country's females marry before age 15, according to a recent report by the Social Affairs Ministry.

Youssef was only 11 when her father married her to a 24-year-old man who works as a farmer in Saudi Arabia, said Ahmed al-Quraishi, chairman of Siyaj human rights organization, which promotes the rights of children in Yemen.

Al-Quraishi said that he stumbled upon Youssef in the hospital while investigating cases of children who had fled from the fighting in the north.

"This is one of many cases that exist in Yemen," said al-Quraishi. "The reason behind it is the lack of education and awareness, forcing many girls into marriage in this very early age."

Impoverished parents in Yemen sometimes give away their young daughters in return for hefty dowries. There is also a long-standing tribal custom in which infant daughters and sons are promised to cousins in hopes it will protect them from illicit relationships, he said.

Al-Quraishi said there are no statistics to show how many marriages involving children are performed every year.

The issue of child brides vaulted into the headlines here two years ago when an 8-year-old Yemeni girl went by herself to a courtroom and demanded a judge dissolve her marriage to a man in his 30s. She eventually won a divorce, and legislators began looking at ways to curb the practice.

In February, parliament passed a law setting the minimum marriage age at 17. But some lawmakers are trying to kill the measure, calling it un-Islamic. Before it could be ratified by Yemen's president, they forced it to be sent back to parliament's constitutional committee for review.

Such marriages also occur in neighboring oil-rich Saudi Arabia, where several cases of child brides have been reported in the past year, though the phenomenon is not believed to be nearly as widespread as in Yemen.

Link to Article
Posted by Christopher Logan at 1:50 PM