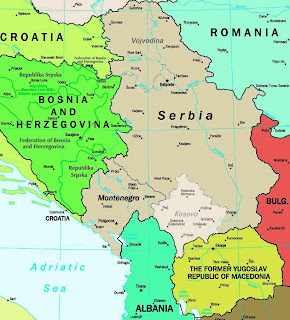 It is so refreshing to see that our own government helped create an Islamic stronghold within the Balkan Peninsula.

BELGRADE, Sept 8 (Reuters) - A Serbian court on Tuesday sentenced four Muslims to prison terms ranging from four to eight years for plotting to attack a football stadium in a southern town of Novi Pazar, a spokeswoman said.

"They were found guilty of conspiring to carry out act of terrorism," Maja Kovacevic said.

"The four were plotting to attack the football stadium during a soccer match when the police presence is strong ".

All four are said to be followers of the puritanical Sunni Muslim Wahhabi sect.

Novi Pazar is the capital of Serbia's Sandzak region, where the majority of the population are moderate Muslims.

Link to Article
Posted by Christopher Logan at 1:29 PM