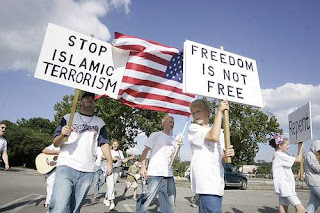 Dove World Outreach Center lead by Senior Pastor Dr. Terry Jones has held their first annual anti-Islam march. I predict that many more will follow, as Churches in the US are awakening to the threat of Islam.

The Dove World Outreach Center, a Gainesville church known for its anti-Islamic message, staged a march and demonstration in front of the Oaks Mall on Friday afternoon.

About 30 participants weaved their way through the mall parking lot and went out on the sidewalk on Newberry Road shortly after 5 p.m. They were wearing T-shirts with the slogan "Islam is of the devil" on the back and carrying signs saying such things as "Jesus is not a liberal," "Islam Kills" and "Jesus is the only way."

Senior Pastor Terry Jones said they wanted to memorialize Sept. 11, the people who died that day and the military, and to spread the church's message.

He said they had planned on going into the mall but the Gainesville police told them earlier in the week that they would be arrested for trespassing if they did.

Some motorists honked horns. One man, who did not wish to be identified, stopped to debate the demonstrators, asking why they were so confrontational.

Meanwhile, on the Bo Diddley Community Plaza in downtown Gainesville, members of the Muslim Association of North Central Florida wore shirts with the message "Muslims Serving Society" as they served meals to about 60 to 100 homeless people.

"Helping the poor and serving the needy is one of the principles of Islam so we try to do it," said Farouk Dey, a member of the Muslim Association of North Central Florida The organization, along with the local chapter of the national Muslim organization Project Downtown, serves the meals each Saturday but decided this week to move the meals to Friday to commemorate the Sept. 11th anniversary.

"As a Muslim community in America we are trying to send a message to our American brothers and sisters that (Sept. 11th) does not define us," Dey said. "We are a peaceful religion."

Link to Article
Posted by Christopher Logan at 9:35 AM

I saw so much useful data in this post!