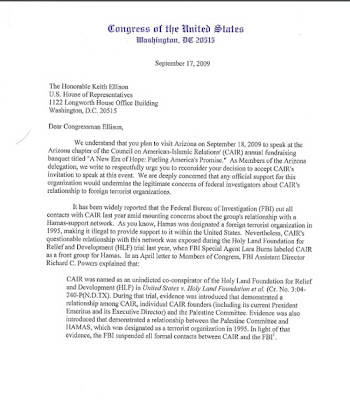 A few days ago Islamocongressman Keith Ellison was given a letter from a Congressional delegation, stating that he should stay away from the Islamic terrorist supporters of the Council on American Islamic Relations (CAIR). Mr. Ellison has once again shown us which side he is on, and has defied the request. Voting for Muslims is a mistake, as they will use the power to advance their Islamic agenda.

The only Muslim in Congress defied criticism from Arizona's congressional delegation and spoke Friday at a fundraiser for the local chapter of a national organization with suspected links to Hamas.

"We are deeply concerned that any official support of this organization would undermine the legitimate concerns of federal investigators about CAIR's relationship to foreign terrorist organizations," the letter said.

But Ellison, a Muslim convert, came anyway and was applauded by about 300 people who attended a dinner at the Hilton Phoenix East/ Mesa. Ellison spoke about the fresh start in relations with Islamic countries under President Barack Obama's administration.

"I would never associate myself with anyone even soft on terrorism," he said before the speech. "We all want to fight terror. We all want to live in a safe community."

The fears Kyl, Franks and Shadegg expressed in the letter are "ridiculous," he said. 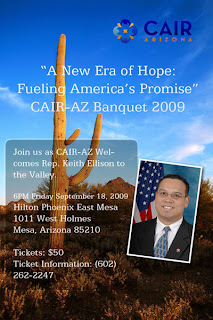 Link to Article
Posted by Christopher Logan at 7:32 AM