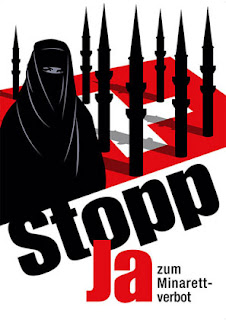 Earlier today I had posted an article that stated, that Switzerland had banned these anti-minarets posters. Thankfully Zurich has remembered a little something called free speech, and has decided to allow the posters. Maybe there is still some hope for Europe.

Hat tip to the Wrath.

Switzerland's biggest city, Zurich, has allowed the use of a controversial poster which urges a ban on the building of minarets in the country.

The poster shows a woman dressed in a burka in front of black minarets standing on a Swiss flag.

The advert is being used by the far-right Swiss People's Party (SVP) ahead of next month's referendum on whether to ban the building of new minarets.

The Swiss Federal Commission Against Racism said earlier this week that the poster was "tantamount to the denigration and defamation of the peaceful Swiss Muslim population".

Some media reports have said the minarets resemble missiles.

Zurich city council said on Thursday that although it disapproved of the "negative and dangerous" poster, it had to be accepted as part of political free speech ahead of the 29 November national referendum.

The city followed the examples of Geneva, Lucerne and Winterthur, who earlier also gave the green light to the use of the SVP's advert.

But a number of Swiss cities - including Basel, Lausanne and Fribourg - have banned the advert in public spaces.

Meanwhile, an opinion poll on Thursday showed that 51% of those questioned would reject the proposed ban.

Link to Article
Posted by Christopher Logan at 8:51 PM