48 Arrests at Anti-Islam rally in Manchester 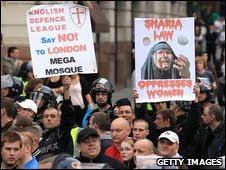 This is an update to the "30 Arrests at Anti-Islam Protest in UK" story. While the Britishness supporting English Defense League was outnumbered, it appears that their numbers are growing. This is still hope.

48 arrests at anti-Islam rally in Manchester

By Vasilije Gallak on Oct 11, 2009 in Featured, United Kingdom
London – Police arrested 48 people Saturday night in Manchester during a rally by an English nationalist group and counter demonstrations.

Authorities estimated about 700 supporters of the English Defence League protested what they called radical Islam and Islamic law. Some participants were described as making Nazi salutes.

Some 1,400 counter demonstrators marched in protest of the rally, accusing the English Defence League of bigotry and fascism.

Saturday’s confrontation was the latest rally by the group that has sparked clashes in the last several weeks. (dpa)

Link to Article
Posted by Christopher Logan at 10:21 PM

I live in Manchester, and I support what the EDL stands for. The real fascists are the Unite Against Fascism crowd,who are happy to let Islamism take over in this country. I support the right of British people to protest against the despicable behaviour of Islamofascists who because of the UK Government's fear of them, allow them to insult British troops returning from Afghanistan. We have to stand up for freedom of speech, and our way of life.

We have the same problems here in America it is just not as bad yet.

We are in this together mate!

I left the UK, I couldn't take it any more. I would come back tomorrow if we could take control back of our country and indulge in freedom of speech, i.e not be afraid to speak up for our values and way of life. But no one in Westminster is brave enough. It seems like it's just too late.

I left for Canada with my family over 5 years ago, disgusted at successive governments that marginalised and even persecuted the indiginous majority population for simply being who they are.

I plan to return to the UK once the Conservatives get in (or preferably the UKIP) - and I will confront any and every Islamofascist who dares to march on the same streets my forefathers fought (and died) to protect from tyranny.

I saw really much worthwhile info in this post!