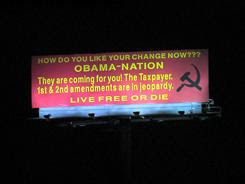 The voices against IslamoCommie Obama, are clearly on the rise.

If you are traveling in the eastbound lanes of the freeway between Adams Dairy Parkway and the Grain Valley exit you will see a sign that appears to be anti-President Barack Obama.

The sign features the hammer and sickle, a symbol of communism and insinuates that Obama will jeopardize the first and second amendments to the Constitution, which are free speech and the right to keep and bear arms.

He says he isn't necessarily anti-Obama, but is against the policies coming out of the White House.

He calls the Federal Stimulus Package a waste and is equally upset over the bailout of the Big 3 Auto Makers.

Link to Article
Posted by Christopher Logan at 4:55 PM