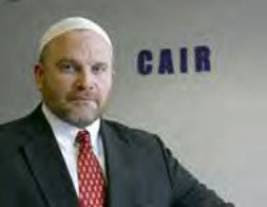 Finally some members of our government have gone after the terrorist supporting Council on American Islamic Relations (CAIR). In return CAIR has done what no one does better than Muslims, they have played the race card.

Four Republican lawmakers have accused the most prominent Islamic advocacy group in Washington of trying to plant "spies" as interns on Capitol Hill.

The claim was quickly denounced as "racist" and "insidious" by the Council on American Islamic Relations, and the effort appears to have little support from GOP leaders.

I am still waiting for someone to tell me what race Islam is.

And the response from CAIR?

"We would love to help people find jobs on Capitol Hill," said Ibrahim Hooper, the communications director for CAIR. "There's a Muslim Staffer Association. Should they be investigated?"

Yes Hooper, every Islamic organization here should be investigated.

The proclamation from the four Republicans came in advance of a book, entitled "Muslim Mafia: Inside the Secret Underworld that's Conspiring to Islamize America," which includes a forward by Myrick. The author of the book, Dave Gaubatz, an anti-Islam activist who wrote last year that “a vote for Hussein Obama is a vote for Sharia Law.”

The lawmakers also released a one page "strategy" document they said they obtained from CAIR. But the document basically lays out a fairly straight forward public relations and lobbying strategy and indeed, one of the goals is "placing Muslim interns in congressional offices" and registering people to vote.

"All they can come up with is that we are political active?" Hooper asked. "The terror threat is that Muslims are politically active?"

Hey Hooper, I don't see anyone saying that Muslims being political active is a terrorist threat. So lets stick to the facts here. The country is waking up to the fact the Muslims use the freedoms of the US to help advance Islam. If Islam ends up dominating the country, non-Muslims will lose numerous rights here. This is about the political aspect of Islam.

This comment that Hooper had made in the past, says it all.

"I wouldn't want to create the impression that I wouldn't like the government of the United States to be Islamic sometime in the future...But I'm not going to
do anything violent to promote that. I'm going to do it through education."

Hooper pointed out that there are indeed many Muslim staffers on Capitol Hill, CAIR is a lobbying organization, and its executive director is on Capitol Hill today — speaking at an interfaith forum on health care with other religious groups in the Rayburn building.

Hooper like I have been saying, within the law your organization will be take down. It is just a matter of time.

Link to Article
Posted by Christopher Logan at 2:42 PM