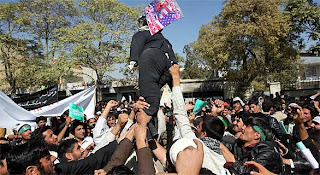 Is this part of the Afghans actually respecting us over their religion? As I have been saying, the infidel does not get to dictate to Muslims what Islam is. General McChrystal had recently stated that the Afghans will tell us when we win the war. Is this a sign of that? Our troops do not deserve the so called leaders that they are forced to serve under. No more nation building, PLEASE!

Afghans protest rumored desecration of Koran by U.S. troops
Hundreds of protesters in Kabul burn an effigy of President Obama, a sign of rising religious conservatism and anti-Americanism in the country. The U.S. military denies committing acts of sacrilege.

Reporting from Kabul, Afghanistan - Hundreds of angry protesters in Afghanistan's capital burned an effigy of President Obamaon Sunday, acting on rumors that American troops had desecrated the Koran.

U.S. military officials emphatically denied that any copies of the Muslim holy book had been mishandled, and accused the Taliban of spreading falsehoods to incite hatred against Western forces.

But the protest -- reminiscent of similar demonstrations in Iraq and elsewhere in the Muslim world in recent years -- showed how easily passions involving religious sensitivities can be stirred up even with a dearth of evidence.

The incident also pointed to a strong undercurrent of anti-American sentiment at a politically fraught time in Afghanistan, less than two weeks before a runoff to settle a divisive, fraud-tainted presidential election. The Nov. 7 face-off between President Hamid Karzai and former Foreign Minister Abdullah Abdullah was agreed to only after heavy U.S. pressure on Karzai to accept the results of an international audit. The investigators found as many as one-third of the ballots cast for Karzai in the Aug. 20 election had been fraudulent. That put the Afghan leader below the threshold of victory, 50%, which made a runoff necessary.

On Sunday morning U.S. news interview shows, both candidates ruled out a power-sharing agreement to avoid the runoff. Against this political backdrop, the Koran protest reflected a rising religious conservatism even among some members of Afghanistan's educated elite, such as the university students who made up most of the crowd of about 1,000 demonstrators.

Police fired warning shots into the air when the demonstrators marched from Kabul University toward the parliament, but no injuries were reported.

Several marchers insisted they were certain that a Koran had been desecrated by U.S. troops in Wardak province, just outside the capital, even if they could not provide particulars of the incident, such as when it was believed to have taken place.

"Muslims were disrespected!" said Zabiullah Khalil, an engineering student. "The foreigners shot the Koran, and then they burned it. They should be tried for this."

The demonstration, like many in the capital, had a heartfelt yet orchestrated feel to it. Khalil, like a number of other participants, expressed broad anger at the United States in connection with the election and its disputed aftermath.

"We don't want a slave government," he said. "We want a real Islamic country."

Link to Article
Posted by Christopher Logan at 3:20 PM

Numerous marchersRunescape Money was adament these people were without doubt the Quran had been desecrated through You.S. members of the military throughout Wardak land, simply beyond the money, even if they couldn't supply howcheap Diablo 3 gold to go about the actual episode, for instance gets hotter ended up being considered to occured.