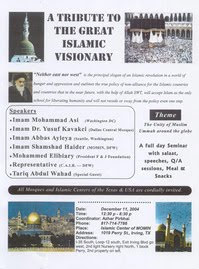 Yesterday I posted an article about Dallas area Muslims playing the usual Islamic victim card. Today's article exposes the truth about Islam in that area. The truth of which Muslims are silent over.


Other side of Muslim bigotry story
Oct 20, 2009
Rod Dreher/Columnist

Yesterday TDMN ran a front pager about concerns local Muslim leaders have that the wider public will judge all Muslims by the actions of Smadi, the alleged terrorist bomber. I don't blame them for being concerned, even though it would be plainly unjust to hold an entire community responsible for the alleged actions of a lone wolf living in Italy and working at a gas station. But that's not the whole story. Here's some supplemental information.

Have we forgotten about the Holy Land Foundation terrorist fundraising convictions? Those defendants weren't outliers like Smadi, but pillars of the local Islamic community. Have we forgotten about the anti-Christian, anti-Semitic hate literature found at the Dallas Central Mosque, which prompted this newspaper to editorialize thus in 2005 (the link to the entire editorial is dead, but here's an excerpt):

According to the report (available at freedomhouse.org/religion), investigators gathered literature that teaches contempt for Jews, Christians and tolerant Muslims, as well as hatred for America. Material found in a Houston mosque even commands the faithful to establish a revolutionary fifth column.

Some of these documents came from the Dallas Central Mosque in Richardson.

Unfortunately, this kind of thing is not altogether alien to this mosque. Last spring, it hosted a youth quiz competition, sponsored by two national organizations closely tied to the worldwide Islamist movement. Kids were tested on the work of premier jihad ideologist Sayyid Qutb.

The mosque's imam, Dr. Yusuf Kavakci, has publicly praised two of the world's foremost radical Islamists, Yusuf Qaradawi and Hasan al-Turabi, as exemplary leaders. Dr. Kavakci also sits on the board of the Saudi-backed Islamic Society of North America, described in congressional testimony as a major conduit of Wahhabist teaching. Yet Dr. Kavakci tells The Dallas Morning News he rejects Wahhabist teaching. Something doesn't add up.

Dr. Kavakci is a national leader in the Islamic Society of North America (ISNA), which according to the FBI and other authoritative sources, is rooted in the radical global Muslim Brotherhood. This connection is what earned ISNA, CAIR and other Muslim groups a place on the U.S. government's list of unindicted co-conspirators in the HLF trial.

And have we forgotten about the notorious event held at an Irving mosque a few years ago -- the "Tribute to the Great Islamic Visionary," the Ayatollah Khomeini -- and which attracted the cream of North Texas Islamic leaders? The story of Islamic extremism in North Texas is a lot more complicated than you might think. One may well be a stone-cold bigot for having critical suspicions of the local Muslim community. Or one may simply be paying attention to the facts as they are, not as one would prefer them to be.

Link to Article
Posted by Christopher Logan at 8:07 AM

Believers. Nevertheless,Buy diablo 3 Gold terrorism as well as strikes through Islamic fundamentalists against shops promoting intoxicating merchandise have got compelled many companies to shut. At this point, a lot of exactly who even now market this kind of products be expecting the modern bylaw to strike Guild wars 2 Goldtheir particular currently half-empty wallets also more challenging.