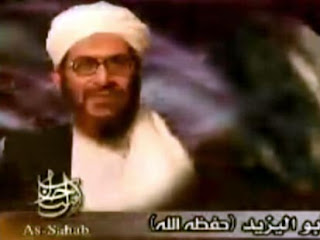 Once again we see hatred being spewed, from what many naive people consider to be a "moderate" Islamic country. As for the threat itself, when is the majority of America going to wake up and face the reality that Islam is at war with us? If we do not return the favor they will destroy us. Within the law Islam must be stopped!

KABUL – He's a heavyweight in al-Qaida but little known outside jihadi and intelligence circles even though he runs the terrorist movement's operations in a key front — Afghanistan — and may be linked to a plot in New York.

Mustafa al-Yazid makes no secret of his contempt for the United States, once calling it "the evil empire leading crusades against the Muslims."

"We have reached the point where we see no difference between the state and the American people," al-Yazid told Pakistan's Geo TV in a June 2008 interview. "The United States is a non-Muslim state bent on the destruction of Muslims."

Al-Yazid may also have links to Afghan immigrant Najibullah Zazi, whom U.S.
authorities have arrested in an alleged plot to use homemade backpack bombs, perhaps on New York City's mass transit system.

Two U.S. intelligence officials, speaking on condition of anonymity because the case remains under investigation, told The Associated Press that the bespectacled, Egyptian-born al-Yazid used a middleman to contact Zazi, indicating that the al-Qaida leadership took a keen interest in what U.S. officials call one of the most serious terrorism threats crafted on U.S. soil since the 9/11 attacks.

Despite his relative obscurity in the West, the shadowy, 55-year-old al-Yazid, who barely stands 5-foot-5 inches tall, has been involved with Islamic extremist movements for nearly 30 years since he joined radical student groups led by fellow Egyptian Ayman al-Zawahri, now the No. 2 figure in al-Qaida after Osama bin Laden.

In the early 1980s, al-Yazid served three years in an Egyptian prison for purported links to the group responsible for the 1981 assassination of Egyptian President Anwar Sadat. After his release, al-Yazid, also known as Sheik Said and Abu Saeed al-Masri, turned up in Afghanistan, where, according to al-Qaida's propaganda wing Al-Sabah, he became a founding member of the terrorist group.

He later followed bin Laden to Sudan and back to Afghanistan, where he served as al-Qaida's chief financial officer, managing secret bank accounts in the Persian Gulf that were used to help finance the Sept. 11, 2001, attacks in New York and Washington.

Link to Article
Posted by Christopher Logan at 9:55 AM