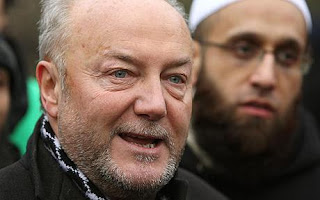 Back in early June, Obama stated that he would ease the impact of post-9/11 scrutiny of Islamic charities. Well, Obama you might want to cater to Islam, but non-Muslim US citizens will not sit silently, our eyes are opening to Islam.

IRVINE, Calif. — University of California, Irvine has forwarded to the Justice Department allegations that money raised at a speech sponsored by the Muslim Student Union was sent to a terrorist organization.

The university said Wednesday that it referred to the agency a complaint that funds collected at a May 21 speech by controversial British politician George Galloway went to his group, Viva Palistina, which gave the money to Hamas.

Muslim student leaders say the allegations are false. They say they might have mistakenly breached university policy, which bans such fundraisers, but argue that the Zionist Organization of America filed the complaint to intimidate Muslims on campus.

In November 2007, a federal civil rights investigation found the Zionist group failed to prove that the university respond improperly to complaints about harassment of Jewish students.

Link to Article
Posted by Christopher Logan at 9:09 PM