L.A. Islamic leaders: FBI is Infringing on our Freedom of Religion 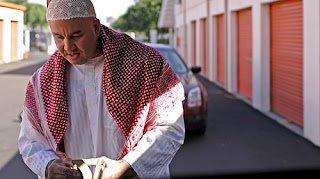 L.A. Islamic leaders including the Council on American Islamic Relations (CAIR) are complaining that because of FBI an informant being planted and now exposed at a local Mosque that Muslims are now afraid to show up to pray which is against their freedom of religion. A Mosque leader has also stated that since numerous Islamic charities have been closed down because of their ties to terrorism that this also is infringing on their right to freedom of religion. As giving to Islamic charities is one of the five pillars of Islam.
Translation:Islam breeds terrorism and we must support it.

By Teresa Watanabe and Paloma Esquivel
March 1, 2009
The Islamic Center of Irvine is a beige stucco building that blends into the rows of office buildings surrounding it. But last week, it became the most publicized mosque in California with disclosures that the FBI sent an informant there to spy and collect evidence of jihadist rhetoric and other allegedly extremist acts by a Tustin man who attended prayers there.

The revelations dismayed mosque members like Omar Turbi, 50, and his 27-year-old son who shares his name. After Friday prayer service last week, while hundreds of others scurried back to work, the pair stood with their backs to a wall and mulled over the news.

"It gives you a little bit of apprehension about who you trust," the elder Turbi said. "Makes you think twice about what you say; what if people misunderstand you?"

Turbi's fears were echoed by other Muslims throughout Southern California last week. Some say a climate of suspicion toward them, fueled by 9/11 and underscored by the latest disclosures of FBI surveillance, is inhibiting their freedoms of speech and faith.

According to Muslim leaders, some people are avoiding mosques, preferring to pray at home. Others are reducing donations to avoid attracting government attention or paying in cash to avoid leaving records. ."
And some mosques have asked speakers to refrain from political messages in their sermons, such as criticism of U.S. foreign policy, said Hussam Ayloush, executive director of the Council on American-Islamic Relations in Anaheim.

"Some average Muslims interested only in praying are avoiding mosques for fear of somehow being monitored or profiled," Ayloush said. "Everybody is afraid, and it is leading to an infringement of the free practice of our religion."."

Both Ayloush and Shakeel Syed of the Islamic Shura Council of Southern California, an umbrella organization of 68 area mosques, said numerous Muslims have reported to them attempts by the FBI to recruit them as informers. In virtually all cases, they said, the Muslims in question had immigration and other legal problems or were applying for green cards. "We will make your problems vanish if you cooperate," Syed said the FBI told Muslims.

Suspecting widespread surveillance of their community, several American Muslim organizations and their leaders filed a Freedom of Information Act request, followed in 2007 by a lawsuit against the federal government, demanding the release of all information collected on them.

Muslims have also complained of FBI interrogations about their charitable contributions, asking why were they donating and who was receiving their money. At one Los Angeles-area mosque, nearly every donor was quizzed by the FBI, and the mosque subsequently experienced a steep decline in donations, Ayloush said.

Leaders at other mosques also say their contributions are down, although most attribute much of the decline to the recession. The Islamic Center of Corona Norco, for instance, has experienced a decline in donations of 30% to 50% in the last three to four years, which board member Rafe Husain attributed both to the economy and what he called a climate of fear. "People feel tense and uncomfortable," Husain said. "I've talked to some people who try to avoid mosque activity."

Since 9/11, federal authorities have also shut down at least six of the Muslim community's major charitable organizations, accusing them of involvement in terrorist financing. The actions have impeded Muslims from fulfilling the duties of their faith, Syed said, because charitable giving is not a voluntary act in Islam but a religious obligation.

The latest tensions have further frayed relations between the FBI and Muslims.

Since 9/11, the two sides had worked to develop a partnership, forming a Multi-Cultural Advisory Committee to meet monthly.

But the FBI unilaterally broke off ties with the American-Islamic council a few weeks ago, issuing a cryptic statement that the agency would limit contact until "certain issues" were addressed by CAIR's national headquarters in Washington.

In protest, Syed's umbrella group of Southern California mosques suspended its contacts with the FBI.

The Muslim Public Affairs Council in Los Angeles remains active with the committee, saying it believes in engagement, but has asked for a meeting with the FBI, said the council's senior advisor, Maher Hathout.

"People cannot be suspects and partners at the same time," he said. "Unless the FBI's style changes, the partnership with the Muslim community will not be fruitful."

I'm sure they have nothing to fear. The current regime thinks the same way Europe does and will make the exact same mistake of allowing virulent enclaves develop. Anything the FBI is doing is a short-lived remnant of Bush's admin. We'll have the same problem the Brits have within only a few years with threatening jihadis chasing the police thru downtown NY and LA. The game's over. They're willing to die for their beliefs and we simply are not. They'll win, the West will lose. I feel most sorry for Libs and women who have the most to lose. We fairly conservative men only need grow beards, fake praying and put our wives and daughters in potato sacks.

I basically agree, but I have not not given up hope. There is a man named Wilders out there. One strong leader is all it takes.

You make a very good point though, they are willing to die for what they believe in and most non-Muslims Westerners cannot even bring themselves to face the issue.

No Islamic leader should ever talk about religious freedoms being infringed upon until churches and synagogues are built in islamic countries, with Christians and Jews allowed to worship there are equals, not in dhimmitude.

An FBI agent can go into any church in America....what's the difference? What do these muz pukes have to hide? The very fact that they are "upset" that an FBI agent, or anybody else that may be reporting illegal acts to the authorities, is grounds for suspicion. Obviously this whole mosque and it's muz attendees needs to be investigated and closed and the muz traitors deported immediately, if wrongdoing is found to be occurring.

How about we don't allow the ideology of our enemy to have it's "places of worship" on our soil? Is it me or is this like allowing the Nazi Party during WW2 to have offices in our cities? AMERICANS: IN CASE YOU'VE BEEN PUT TO SLEEP BY 300+ CHANNELS OF TV, WE ARE AT WAR. THEY WANT TO KILL YOU, ME, OUR KIDS AND OUR WOMEN AND TURN OUR COUNTRY INTO A BEDTIME STORY FOR THEIR CHILDREN.

Hi Tony,
I am all for ending their immigration and all Mosque construction. Your comparisons are valid.