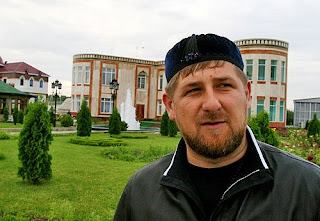 One by one we see countries giving up the fight and giving into the demands for Sharia law. We can see that these Islamists have extremely strong convictions in their beliefs and that they will never stop pushing, but as of now much of the world does not have the stomach to continue fighting back. I believe that if the West does not end Muslim immigration eventually we will lose.

GROZNY, Russia (AP) — The bullnecked president of Chechnya emerged from afternoon prayers at the mosque and with chilling composure explained why seven young women who had been shot in the head deserved to die.

Ramzan Kadyrov said the women, whose bodies were found dumped by the roadside, had "loose morals" and were rightfully shot by male relatives in honor killings.

"If a woman runs around and if a man runs around with her, both of them are killed," Kadyrov told journalists in the capital of this Russian republic.

The 32-year-old former militia leader is carrying out a campaign to impose Islamic values and strengthen the traditional customs of predominantly Muslim Chechnya, in an effort to blunt the appeal of hardline Islamic separatists and shore up his power. In doing so, critics say, he is setting up a dictatorship where Russian laws do not apply.

Some in Russia say Kadyrov's attempt to create an Islamic society violates the Russian constitution, which guarantees equal rights for women and a separation of church and state. But the Kremlin has given him its staunch backing, seeing him as the key to keeping the separatists in check, and that has allowed him to impose his will.

"Kadyrov willfully tries to increase the influence of local customs over the life of the republic because this makes him the absolute ruler of the republic," said Yulia Latynina, a political analyst in Moscow.

Kadyrov's bluster shows how confident he is of his position. "No one can tell us not to be Muslims," he said outside the mosque. "If anyone says I cannot be a Muslim, he is my enemy."

Few dare to challenge Kadyrov's rule in this southern Russian region of more than a million people, which is only now emerging from the devastation of two wars in the past 15 years. The fighting between Islamic separatists and Russian troops, compounded by atrocities on both sides, claimed tens of thousands of lives and terrorized civilians.

Kadyrov describes women as the property of their husbands and says their main role is to bear children. He encourages men to take more than one wife, even though polygamy is illegal in Russia. Women and girls are now required to wear headscarves in all schools, universities and government offices.

"Headscarves make a woman beautiful," said Zulikhan Nakayeva, a medical student whose long dark hair flowed out from under her head covering, her big brown eyes accentuated by mascara.

But many chafe under the restrictions.

"How do women live in Chechnya? They live as the men say," said Taisiya, 20, who asked that her last name not be used for fear of retribution. She was not wearing a headscarf while shopping in central Grozny, which she said was her way of protesting.

Most women now wear headscarves in public, though the scarves rarely fully cover their hair and in some cases are little more than colorful silk headbands. Women who go out without a headscarf tend to tuck one into their bag for use where headscarves are required.

Many people suspect Kadyrov is branding the seven late November slayings honor killings to advance his political agenda. He said the women were planning to go abroad to work as prostitutes, but their relatives found out about it and killed them.

"If women are killed according to tradition then it is done very secretly to prevent too many people from finding out that someone in the family behaved incorrectly," said Natalya Estemirova, a prominent human rights activist in Grozny.

Estemirova said two of the women were married, with two children each. Their husbands held large funerals and buried them in the family plot, which would not have happened if the women had disgraced their families, she said.

Kadyrov's version also has been contradicted by federal prosecutors in Moscow, who have concluded relatives were not involved. No arrests have been made and the investigation is continuing. Kadyrov's office refused to comment on the investigators' conclusion.

The Moscow newspaper Novaya Gazeta reported that some of the women worked in brothels frequented by Kadyrov's men. Many Chechens say they suspect the women were killed in a police operation. The truth of the killings may never be known, given how much Kadyrov is feared.

Rights activists fear that Kadyrov's approval of honor killings may encourage men to carry them out. Honor killings are considered part of Chechen tradition. No records are kept, but human rights activists estimate dozens of women are killed every year.

"What the president says is law," said Gistam Sakaeva, a Chechen activist who works to defend women's rights. "Because the president said this, many will try to gain his favor by killing someone, even if there is no reason."

Sakaeva also said she worried that Chechen authorities would now be less willing to prosecute men suspected of killing women.

Kadyrov inherited his position from his father, Akhmad Kadyrov, a Muslim cleric and former rebel commander who fought the Russians during Chechnya's war of independence in 1994-1996. Shortly after war broke out again in 1999, the elder Kadyrov switched sides and brought Chechnya back into Moscow's fold.

Ramzan Kadyrov worked as the head of his father's security force, which was accused of kidnapping, sadistic torture and murder. After Akhmad Kadyrov was killed by a terrorist bomb in 2004, power passed to his son.

Vladimir Putin, then president and now prime minister, embraced the younger Kadyrov, who has succeeded in ending a wave of terror attacks that haunted the early years of Putin's presidency. But as Kadyrov has consolidated his power, many of his critics and political rivals have been killed. Some have been gunned down on the streets of Moscow, including journalist Anna Politkovskaya, whose death in 2006 shocked the world.

In one of the most recent killings, a Chechen who had accused Kadyrov of personally torturing him was shot last month as he walked out of a grocery store in Vienna, Austria.

Kadyrov has denied any involvement in the killings.

The Kremlin appears willing to continue allowing Kadyrov to rule as he wishes, as long as he prevents another outbreak of violence. And Kadyrov has won the grudging respect of many Chechens for bringing a measure of peace and stability.

"People want to believe that things are getting better," said Sakaeva. "They are tired of war."

Link to Article
Posted by Christopher Logan at 9:38 AM

i guess - we should blame Clintons, who saved these jerks from Russian military action. Do they deserve even Oxygen??

How many times has Western nations helping Islamic nations backfired on us?

Chechnya, land of slavers, murderers and gunrunners. They're pretty good at killing little kids too. Too bad there are any left alive.

Ashame Russia didn't wipe Chechnya off the map when it had the chance!!

Claiming that honour killings are "traditional" or "cultural" is disingenuous at best, really just a bald-faced lie. Muslim men kill their own women; this is not restricted to one particular part of the world, it happens wherever islam exists. A woman in islam is like a Jew in Nazi Germany, her life is worth only what she can produce.

I found a great deal of helpful information in this post!