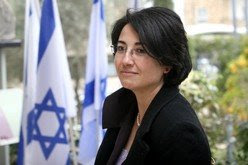 Arab-Israeli politician Haneen Zubai who is a member of the Israel Knesset (equivalent to our Senate) is taking a stand for the Iranian nuke program and for Iran to balance out Israel's power in the region. This is just another example of our enemies using our freedoms against us.

New Balad MK Haneen Zuabi, the first woman to be elected to the Knesset as a representative of an Arab party, has welcomed Iran's growing influence on Palestinian affairs and praised Iran's quest for a nuclear weapon as a means of offsetting Israel's regional military edge. Having Israel as the region's sole nuclear power, she said, was "dangerous to the world."

Interviewed in English twice in recent days - in her Knesset office and in a Jerusalem hotel - Zuabi, one of Balad's three MKs and the former director of the I'lam: Media Center for Arab Palestinians in Israel, said Iran's role in Palestinian affairs was "more useful" than that of regimes like Jordan and Egypt, in that Iran stood more firmly "against occupation than a lot of the Arab countries. This is our interest."

She said Egypt and Jordan were scared of a free and democratic Palestinian state.

Queried regarding Iran's quest to manufacture nuclear weapons, Zuabi stated that having Israel as the region's sole nuclear power was disadvantageous. "It would [sic] be more supporting me to have a counter-power to Israel," she said. "I need something to balance [Israel's] power."

Zuabi was asked if she felt worried, living among Jews, that Iran was getting close to acquiring a nuclear weapon. She replied: "No, I am not." Indeed, she said was "more afraid from the Israeli nuclear [weapons]."

Israel does not officially admit to a nuclear weapons capability, but is widely believed to have had such a capability since the 1960s.

When asked if she thought that Israel would use nuclear weapons, she replied, "The Israelis? I think yes… And I am afraid from real risk rather than from potential risk."

The Iranian bomb was only "a potential" threat. The real danger was the Israeli army, she said. "Every day the Israeli [army] uses its violence, army violence."

Zuabi said that Israel was an aggressor state, and that only a situation similar to that which existed between the Soviet Union and United States in the form of the doctrine of "Mutually Assured Destruction" would restrain Israel. "It is more dangerous to the world, more dangerous to everyone, more dangerous to the Palestinians, to Israelis, to have Israel as the only powerful state. I need something to balance its power because this balance of power will [sic]restrict the Israeli using of power. The Israeli violence of the army is an outcome of Israel's convenient feeling that no one will restrict her, that no Arab country will really declare a war against [Israel]."

Asked whether an Iranian bomb would make America nervous and lead to more US pressure on Israel, and whether that would be good from her point of view, Zuabi replied: "Exactly."

Zuabi declared that the very concept of a Jewish state was "inherently racist", saying that Israel must be turned into a "state of all its citizens," which would eliminate its Jewish or Zionist nature.

The Knesset Central Elections Committee disqualified the Balad party from running in the recent elections due to its members' refusal to recognize Israel as a Jewish state and reported calls for violence against it. The ban was overturned by the Supreme Court.

Responding to Zuabi's comments, Balad party chairman Dr, Jamal Zahalka said: "I think Ms. Zuabi tried to explain some analysis [about] what's [sic]better if you have. [But] this is not a position. It's an analysis [of] what would be safer for the region, if there is a balance." Her comments, he said, did not constitute "supporting a nuclear weapon in Iran."

Some of Zuabi's statements were consistent with her previously stated views. On February 13, she was quoted by the Balad-affiliated Arabs48 internet news site saying that "Balad's concept, which rejects the 'Jewish state' idea, is the only idea that can remove [Avigdor] Lieberman from the circle of political and moral legitimacy… When you agree with the 'Jewish state' idea, you necessarily agree with the idea of loyalty to this state. Rejecting the 'Jewish state' concept will block the road for anyone who demands our loyalty to such a state. There is no logic in demanding that I be loyal to an idea to which I do not agree to begin with, especially since I am proposing an alternative and fighting for it… The language of democracy does not speak of loyalty. This is a language of fascism, just like Lieberman. The language of democracy speaks of rights, equality, and values."

Link to Article
Posted by Christopher Logan at 12:41 PM