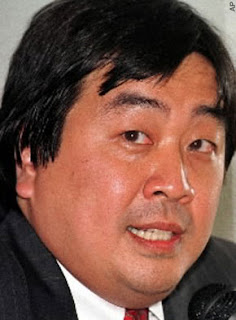 The Islamic catering, America destroying Obama is at it again. He has announced his pick for the State Department's top legal advisor. His pick is radical Harol Koh, who has stated that he has no problem allowing Sharia law into our US courts. It is sad that the American voters could not figure out just how radical Obama is.

JUDGES should interpret the Constitution according to other nations' legal "norms." Sharia law could apply to disputes in US courts. The United States constitutes an "axis of disobedience" along with North Korea and Saddam-era Iraq.

Those are the views of the man on track to become one of the US government's top lawyers: Harold Koh.

President Obama has nominated Koh -- until last week the dean of Yale Law School -- to be the State Department's legal adviser. In that job, Koh would forge a wide range of international agreements on issues from trade to arms control, and help represent our country in such places as the United Nations and the International Court of Justice.

It's a job where you want a strong defender of America's sovereignty. But that's not Koh. He's a fan of "transnational legal process," arguing that the distinctions between US and international law should vanish.

What would this look like in a practical sense? Well, California voters have overruled their courts, which had imposed same-sex marriage on the state. Koh would like to see such matters go up the chain through federal courts -- which, in turn, should look to the rest of the world. If Canada, the European Human Rights Commission and the United Nations all say gay marriage should be legal -- well, then, it should be legal in California too, regardless of what the state's voters and elected representatives might say.

He even believes judges should use this "logic" to strike down the death penalty, which is clearly permitted in the US Constitution.

The primacy of international legal "norms" applies even to treaties we reject. For example, Koh believes that the UN Convention on the Rights of the Child -- a problematic document that we haven't ratified -- should dictate the age at which individual US states can execute criminals. Got that? On issues ranging from affirmative action to the interrogation of terrorists, what the rest of the world says, goes.

Including, apparently, the world of radical imams. A New York lawyer, Steven Stein, says that, in addressing the Yale Club of Greenwich in 2007, Koh claimed that "in an appropriate case, he didn't see any reason why sharia law would not be applied to govern a case in the United States."

A spokeswoman for Koh said she couldn't confirm the incident, responding: "I had heard that some guy . . . had asked a question about sharia law, and that Dean Koh had said something about that while there are obvious differences among the many different legal systems, they also share some common legal concepts."

Score one for America's enemies and hostile international bureaucrats, zero for American democracy.

Koh has called America's focus on the War on Terror "obsessive." In 2004, he listed countries that flagrantly disregard international law -- "most prominently, North Korea, Iraq, and our own country, the United States of America," which he branded "the axis of disobedience."

He has also accused President George Bush of abusing international law to justify the invasion of Iraq, comparing his "advocacy of unfettered presidential power" to President Richard Nixon's. And that was the first Bush -- Koh was attacking the 1991 operation to liberate Kuwait, four days after fighting began in Operation Desert Storm.

Koh has also praised the Nicaraguan Sandinistas' use in the 1980s of the International Court of Justice to get Congress to stop funding the Contras. Imagine such international lawyering by rogue nations like Iran, Syria, North Korea and Venezuela today, and you can see the danger in Koh's theories.

Koh, a self-described "activist," would plainly promote his views aggressively once at State. He's not likely to feel limited by the letter of the law -- in 1994, he told The New Republic: "I'd rather have [former Supreme Court Justice Harry] Blackmun, who uses the wrong reasoning in Roe [v. Wade] to get the right results, and let other people figure out the right reasoning."

Worse, the State job might be a launching pad for a Supreme Court nomination. (He's on many liberals' short lists for the high court.) Since this job requires Senate confirmation, it's certainly a useful trial run.

What happens to Koh in the Senate will send an important signal. If he sails through to State, he's a far better bet to make it onto the Supreme Court. So Senate Republicans have a duty to expose and confront his radical views.

Even though he's up for a State Department job, Koh is a key test case in the "judicial wars." If he makes it through (which he will if he gets even a single GOP vote) the message to the Obama team will be: You can pick 'em as radical as you like.

Meghan Clyne is a DC-based writer.

Link to Article
Posted by Christopher Logan at 10:48 AM