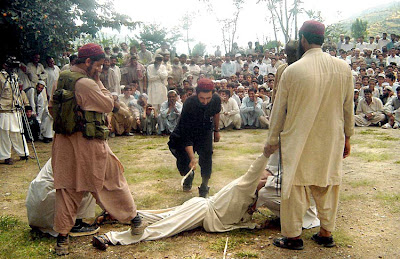 Earlier this month I posted about the "peace" deal between the Pakistani government and the Taliban. The deal allowed the Taliban to govern Swat Pakistan under sharia law. Those courts are a reality now and non-sharia judges have been told to take a walk. Let the legal brutality begin.

Authorities said two qazis, or judges trained in Islamic law, reviewed around 30 minor cases in Mingora, the largest city in Swat, on Tuesday.

The provincial government of the North West Frontier Province (NWFP) had agreed to introduce sharia as part of a ceasefire deal with the so-called Pakistani Taliban in Swat in February, but had faced criticism in recent weeks for foot-dragging.

US officials have expressed their concern that the region could become a safe-haven for anti-government fighters.

Mullah Sufi Muhammad, the local religious leader who negotiated the deal, had threatened to relaunch regional protests if Islamic courts were not established quickly.

Sufi Muhammad, who leads Tehrik-e-Nifaz Shariat Muhammadi (TNSM), or movement for the introduction of sharia, has called on all non-sharia judges in Swat valley to stand down from their posts.

At least 16 government-appointed judges were reported to have not turned up for work in Swat following the edict.

Al Jazeera's Hamidullah Khan said the move puts Sufi Muhammad at odds with the NWFP provincial assembly, which had earlier decided that judges appointed by the government should continue on in their roles.

However, Moulana Rizwanullah, Sufi Muhammad's son and deputy, said the TNSM would not allow any other law systems to contradict sharia.

He reiterated Sufi Muhammad's statements that there are no non-sharia judges in Islam, adding that there is also no concept of a lawyer.

Sufi Muhammad's group also said it would open a Dar ul-Qaza, or Islamic supreme court, where people could appeal against the decisions of qazis.


To view full article
Posted by Christopher Logan at 8:58 AM

It won't really have effect, I consider like this.

It cannot succeed as a matter of fact, that's what I suppose.