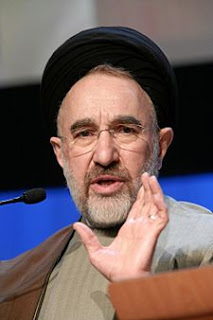 While democracy is crumbling in Pakistan, the meaningless democracy in Iran stands. As the so called reformist Mohammed Khatami has pulled out of the race. Maybe the madman Ahmadinejad will win again.

Khatami's entry into the race against President Mahmoud Ahmadinejad a month ago boosted the hopes of some among the reformists, who favor improving ties with the West and liberalizing Iran's conservative Islamic government.

But two other prominent reformists entered the race for the June 12 election after Khatami. One of them, former Prime Minister Mir Hossein Mousavi, is a former hard-liner who Khatami has said has a better chance of siphoning conservatives' votes. With Khatami pulling out, Mousavi is now seen as the leading reformist candidate.

The other reformist candidate in the race, former parliament speaker Mahdi Karroubi, has repeatedly said he won't drop out regardless of who else is running, but his party was meeting Monday to assess the situation.

"I'm pulling out of the election on the basis of a moral obligation and to avoid scattering the votes so that ... change and improvement will be more easily achieved and with less cost," Khatami said late Monday in a statement, a copy of which was made available to The Associated Press.

Khatami praised Mousavi as having the necessary qualifications to bring change to the country and said "he can potentially win people's votes and get elected provided we act with wisdom and realism."

Reformers believe they have a strong chance of unseating Ahmadinejad, who came to power in 2005 but has lost popularity because of his handling of the country's faltering economy and other issues. But the maneuvers in the reformist camp reflect a debate over the best strategy for defeating the hard-liner.

Khatami called on Karroubi and Mousavi to avoid fracturing the reformist camp, advising them "to manage the scene with understanding so that ... no rift or differences emerge."

Khatami, a liberal cleric who was president in 1997-2005, was the best known internationally among Iran's reformist politicians and is also popular at home, particularly among the young. But some reformists worried that his candidacy would galvanize the hard-line camp, which strongly dislikes Khatami because they believe he aims to fundamentally change the nature of Iran's Islamic state.

Mousavi, some believe, is better positioned to draw conservatives who have grown disenchanted with Ahmadinejad. The former prime minister, who announced his candidacy last week, is remembered well by many Iranians for managing the country during the 1980-88 war with Iraq, and has strong enough revolutionary credentials to appeal to Ahmadinejad's base.

Khatami said previously that he and Mousavi would not compete against each other. On Sunday, he acknowledged the advantages Mousavi holds in the race.

"Rest assured that Mousavi will recruit a remarkable percentage of votes from the other side. I have reports that some conservatives will not vote for me or (Ahmadinejad), but they would definitely vote for Mousavi," Khatami told supporters.

But, on the other end of the spectrum, Mousavi could dampen enthusiasm among the reformists, whose electoral landslides in the late 1990s depended on massive turnout among the youth, excited at the prospect of change.

"This is a major setback for the reformist camp as a whole. Mousavi is not likely to bring back young Iranians who have been on the political sidelines," said Mehrzad Boroujerdi, a political and religious researcher and Iran specialist at New York's Syracuse University.

"Mousavi doesn't speak the reformers' language. He might try to soften his message to appeal to them, but he still echoes the past to many people," he said.

Prominent political analyst, Saeed Leilaz, said Mousavi is a stronger candidate than Khatami because he "can liquidate Ahmadinejad's support base." But he said Mousavi won't be able to pull in the votes of all Khatami backers.

The election is vital for reformists because they have spent much of the past years in decline. While Khatami was still in office, hard-liners blocked many of his reforms through cleric-led bodies that have powers over the government under Iran's Islamic system. Those same bodies broke reformists' hold on parliament by using their powers to prevent reformist lawmakers from running for re-election. By the 2005 election — in which Khatami could not run because of term limits — the reformists were in disarray and largely eclipsed.

Abtahi, the former reformist vice president, said Khatami's withdrawal is aimed at reaching a united front, and he warned that competition among reformists would pave the way for a second Ahmadinejad term.

"We lost the previous election (2005) because of multiple candidates. And Iran has suffered so much" as a result, he said. "This is a historic opportunity that must not be lost."

Link to Article.
Posted by Christopher Logan at 8:37 PM

Hey, Watch out Australia, this Khatami is headed Down Under.
As reported in Winds of Jihad.

'MELBOURNE Anglican Archbishop Philip Freier is under fire from the Jewish community for hosting a function for former Iranian president Mohammad Khatami while he is in Melbourne this month.'


This Anglican Arch/dhimmi should be boycotted by his parishioners. Iran is threatening to kill all Jews, and to nuke Israel, and kill all Apes and Pigs, and all infidels, and all who stand with the infidels, and hasn’t Australia got a rather large population of Law abiding Jewish citizens. This ‘genocidal mullah from Iran’ should NOT step one bloody foot on Australian soil.