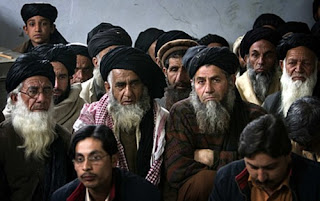 By Christopher Logan
Two weeks ago the Pakistani government agreed to allow the Taliban to place the valley of Swat Pakistan under Sharia law. Some of the new rules are that all shops have to close during pray times and a woman's inheritance shall follow Sharia law. Which says that women receive half the amount that men do. Also Koran classes will be offered in the prisons there.

When the Pakistani government announced that they would allow the Taliban Sharia law, I had stated that the Taliban would not be satisfied, unfortunately I was correct. Last night the Taliban thugs continued their assault on modernity, as they blew up 16 stores selling music and DVDs.

Now that the Taliban were handed their Islamic dream of Sharia law, the have become emboldened. They quickly turned their attention to the Presbyterian Christian community, as they attacked a local Church killing one woman and 28 more. They smashed the Church windows, destroy the Bibles and even tore the cross down from the roof. The local security forces have turned down a request to investigate the attacks. Such a tolerant religion.
Posted by Christopher Logan at 7:36 PM