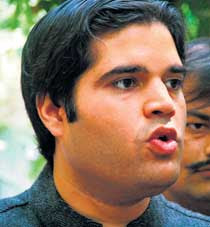 A NY based American Indian group has been campaigning here and in the UK for one of India's anti-Islamic politician's Varun Gandhi. (No relation to Mohandas Gandhi) Gandhi was recently arrested in India for his anti-Islamic remarks, but like Dutch politician Geert Wilders, his support among civilians is growing. One would think that the world would of learned a lesson by all the centuries that Hindus have been persecuted by Muslims.


Indian-American Intellectual Forum, a little known group based in New York, runs a campaign in support of BJP leader's views

New York-based Indian-American Intellectual Forum, a little-known group with saffron leanings, has been running a campaign in the US and UK in support of Varun Gandhi.

The group has, in the days after CDs of Varun's alleged hate speech targeting Muslims came to light, sent press releases to thousands of people in the two countries urging them to support Gandhi's stand. "India is a Hindu-majority country run by a dynasty for 60 years. The Hindus are very weak here and under attack. If someone announces that Hindus will be protected, we will support him. If India becomes an Islamic country, what will be the condition of Hindus?" asked Arish Sahani, the vice-president of the Forum.

Sahani added, "Do you want India to become like Pakistan? What did the government do, when 26/11 took place? Our mission is to fight terrorism and guard India."

Forum officials claim that thousands have congratulated Gandhi on his fearless stand against Islamic terrorism, and that Indians living in USA consider terrorism to be India's most pressing problem and feel that the UPA government's response to it is very weak.

I think its too late in India. You people still have time.

Varun Gandhi booked under NSA by UP Police
http://timesofindia.indiatimes.com/Varun-booked-under-NSA-by-UP-Police/articleshow/4331594.cms

I do not count you guys out. The world should of learned a lesson when it comes to Islam and India.

Nice blog. Only the willingness to debate and respect each other’s views keeps the spirit of democracy and freedom alive. Keep up the good work. Hey, by the way, do you mind taking a look at this new website www.indianewsupdates.com . It has various interesting sections. You can also participate in the OPINION POLL in this website. There is one OPINION POLL for each section. You can also comment on our news and feature articles.

Kindly go through the entire website. Who knows, it might just have the right kind of stuff that you are looking for. If you like this website, can you please recommend it to at least 5 of your friends. Your little help would help us in a big way.