Bulgaria:Entire Villages Being Forced to Convert to Radical Islam 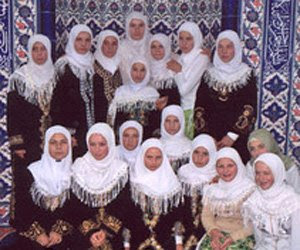 I remember a few years ago when I was telling people that while some Muslims might be coming into the West to assimilate, there were more than enough of them coming in who had other ideas, ideas of taking over. Many people did not agree with me and now Muslims are not even hiding their agenda. Recently we have seen Muslims in the UK and Russia freely admitting that they are not in non-Islamic countries to assimilate. Now the situation is escalating as entire villages in Bulgaria are being forced to convert to Wahhabi Islam. It is time that some drastic actions start taking place. Like ending Muslim immigration and declaring Sharia law illegal. We do not need barbarity of Islamic law and culture in our societies.

Despite Bulgaria's European Union membership, some regions of the country need a second liberation from Ottoman yoke, the Bulgarian Member of the Parliament (MP), Yane Yanev, stated, cited by the Bulgarian news agency, BGNES.

Yanev, who is the leader of the opposition "Order, Law, Justice" Party (RZS) spoke Monday in Blagoevgrad as reported by the local BGNES correspondent.

The leaders of RZS visited Monday several villages in Southern Bulgaria to meet with alarmed teachers and parents, who have presented concrete evidence of the imposed conversion to fundamentalist Islam in the region.

The example of the village of Ribnovo, in the Gurmen municipality, has been presented as the most striking one. In Ribnovo, the school principal, Feim Issa, had imposed full dictatorship on the teaching staff, forcing them to wear traditional Muslim clothes, and encouraging female student to the same. Issa has been illegally appointed as principal with help of the local mosque's leaders and is actively supporting the religion teacher at the school, Murat Boshnak. Boshnak is, reportedly, an individual with suspicious past and unclear educational background. He is not holding even a Bulgarian high school diploma, but has graduated from a religious school in Skopje, Macedonia. Ribnovo residents allege that Boshnak has specialized in Saudi Arabia and is forcefully making parents to sign requests for their children to study the Islam. He is also demanding that children address him as "aga' instead of "gospodin" (Mister), had prohibited girls from attending the last prom in civil attire and issued a ban on celebrations. Boshnak later organized a trip to Turkey with funds from an Arab foundation. Only one girl had attended the prom. Parents, who refuse to follow the fundamentalist rules, are being cursed during services in the local mosque.

Yanev had established similar examples in the village of Satovcha, where the school principal regularly attended classes in radical Islamism in an illegal local fundamentalist school. The principal was currently on maternity leave and, in order to keep the school under control, had appointed her own husband to replace her.

The residents of the villages visited by Yanev are not Turks; they are all Bulgarian-Muslims, speaking only Bulgarian language.

The RZS leader stated he was appalled by the extreme violations of the rights and freedoms of Bulgarian citizens, embedded in the Constitution. RZS distributed to the media video postcards, showing how radical Islam is quickly taking roots in the country, under the courteous watch of the ruling tri-party Coalition.

Yanev and his colleague Dimitar Abadzhiev vowed to signal the State Agency for National Security (DANS) about the citizens' rights violations in the region, which, they say, are sabotaging European values and leading the way of Islam in Europe.

Link to Article.
Posted by Christopher Logan at 3:42 PM

"And when they behead your own people in the wars which are to come, then you will know what this was all about."

Thanks for that quote, I had never seen that.

How come the "moderate" Muslims are not protesting against this?

They wont... Even if a single true statement about Islam is released, hard core Mullahs issue fatwas. Moderate Muslims has escape in west. They run to foreign land and marry westerners to improve their genes (If Islam is really a race!!). They will not say anything till they are made to live with their own race people. So no asylum or immigration for Muslims can only result in their internal struggle. let them fight and die- only then world can be saved. Bush brought enough dirt from Somalia, Iraq, Afghanistan and Pakistan and now, they keep bring their relatives, relatives of relatives and so on.. send all of them back immediately.

Anonymous I am from Europe and I see those types of marriages all the time. They will say and do anything to advance Islam.

Excellent quote DNY! May I use it to show others? Thanks.

THE TIME TO TAKE A STAND IS NOW!!!

I think every person should glance at this.