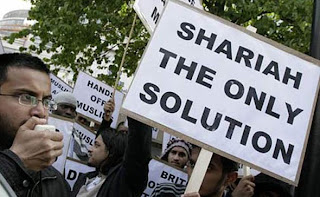 Yes, you read the title correctly. Apparently the intolerance of Islam is allowed across Europe, and basically Europe is silent about it, as no one wants to "offend" Muslims. Now a European human rights conference wants to ensure that Muslims are protected, even as Europe falls to Islam.

The HDIM is Europe's largest human rights conference and is a forum where representatives from government, civil society and international organizations discuss the implementation of OSCE commitments in the human dimension. It is the single most important yearly OSCE event focusing on human rights and democracy in Europe, North America, and Central Asia. OSCE will review how and to what extent governments in the region have put their human rights and democracy commitments into practice.

Link to Article
Posted by Christopher Logan at 9:18 AM