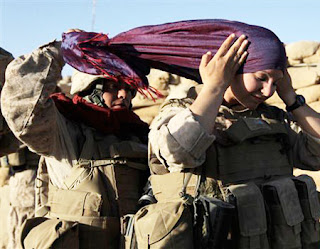 On a near daily basis this site and many others document how non-Muslims are constantly catering to Islam. Apparently the worldwide frenzy has struck the US Marines. As female members of the US Marines in their effort to "win the hearts and minds" (practically begging Muslims to like us) of Muslims will be donning head scarves to show their respect for Islam. Do they even know that they are giving into the dominance that Islam calls for?

That was the drill for female American Marines who set out on patrol this week with a mission to make friends with Afghan women in a war zone by showing respect for Muslim standards of modesty.

The all-female unit of 46 Marines is the military's latest innovation in its rivalry with the Taliban for the populace's loyalty. Afghan women are viewed as good intelligence sources, and more open to the basics of the military's hearts-and-minds effort — hygiene, education and an end to the violence.

"If you show your hair, its kind of like seeing a nude picture here, because women are very covered up," she said.

Women are technically barred from combat units in the Marines, and some infantrymen have been surprised to see them in brightly colored head scarves under their helmets, deployed in the most intense combat zones in the country.

"But ... I think they understand that what we're doing is vital to operations and vital to the counterinsurgency program they want to run," said Gregoire.

Women soldiers were assigned to search women at checkpoints in Iraq, and the experience fed into the Afghan effort, said Cpl. Sarah Furrer, from Colorado Springs, Colorado, who served in both war zones.

"I'm not married and I don't have children, so they think that's awkward because I'm 24," Furrer said of her Iraq experience. But as a result, "we're not so much afraid of engaging the women" in Afghanistan, she said.

"I've found you get great intel from the female population," said Capt. Zachary Martin, who commands the Golf Company, 2nd Battalion, 3rd Marines, stationed in Now Zad. "The women don't want their men out there conducting jihad and getting killed."

But just to find the women is a challenge. There were none in sight as Gregoire's team entered Khwaja Jamal, a village of mud brick homes with no electricity or government presence.

While heavily armed Marines fanned out, the four women started by trying to strike up conversations with the few old men and young children who ventured outdoors.

The several hundred villagers grow wheat and opium poppies in the crossfire between Marines and Taliban fighters who are in the woods less than a mile (about a kilometer) away.

"They look at us through binoculars. They'll kill anybody who talks to the Americans," said Abdul Gayom to explain why the villagers were so wary of meeting the patrol.

1st Lt. Victoria Sherwood was undaunted, talking to him through her Afghan translator. She gave him painkillers for his back, and small presents for the children timidly clustering around. Some of them begged to try on her sunglasses, and promptly made off with them.

Sherwood, from Woodbury, Connecticut, got Gayom to promise he might let her into his compound to meet his wife, who he said with a shrug is "so old, the Taliban probably won't care."

But there was a snag: The translator was male. Could he be in the wife's presence? "No way," said Gayom, who then asked the Marines for more medicine and goods.

Deeper in the village, an elderly woman eventually appeared on a doorstep. Gusha Halam claimed she was 120 — so old she could do what she pleased. Her black head scarf left her wrinkled face uncovered and revealed some hair, dyed bright orange with henna.

"The Taliban took everything from us. Make them leave," Halam said, before her sons and grandsons arrived, stopped the conversation and hustled her indoors.

Link to Article
Posted by Christopher Logan at 3:26 PM

So, I do not really think this will work.