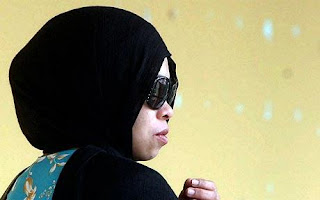 Yesterday I posted an article about the woman in Malaysia who is going to be caned for drinking alcohol. She is more than willing to accept the punish in order to educate Muslims.

"I accept the punishment," she said. "I am not afraid because I was ready to be punished from day one. [The authorities] hope to use my case as a way to educate Muslims. So go ahead. I want to move on with my life."

Today we learn that her father not only agrees with her getting caned, but he wants it done in a public display. What a guy.

Aug. 20 (Bloomberg) -- The caning of a Malaysian mother for drinking a beer should be conducted in public if it is meant to set an example to fellow Muslims, her father said, days before the punishment is set to be carried out in a closed prison.

Kartika Sari Dewi Shukarno, 32, faces six strokes of the cane after a Shariah court found the former model guilty of breaking a law that forbids all Muslims, including foreign visitors, from drinking alcohol. After deciding not to appeal, she may become the first woman to be caned in Malaysia.

The Shariah court in the eastern state of Pahang Kartika fixed Aug. 24 to 30 for the Prisons Department to conduct the sentence, said Mohamad Isa Abd Ralip, president of the Syariah Lawyers Association of Malaysia. Kartika will be held for a week at the women’s prison in Kajang outside Kuala Lumpur, a decision that has puzzled her father, Shukarno Abdul Muttalib.

“As a Muslim, I agree with her punishment, but I don’t agree that it should be done in jail, she is not a prisoner,” Shukarno, 60, told Bloomberg in an interview. “If the authorities want to use this as an example, then the caning should be done in public in Pahang.”

The businessman said it was embarrassing for his daughter to be brought to prison where criminals are held. If there was no alternative, Shukarno said he would ask the authorities to allow him and the media to attend the caning to ensure transparency.

Link to Article
Posted by Christopher Logan at 11:33 AM

So, I do not really consider it may have effect.