4 "Islam is of the Devil" Shirt Wearing Students Sent Home 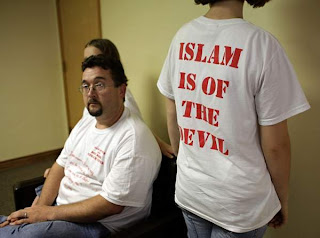 In this update to the 'Islam is of the Devil' Shirt Appears at Elementary School story, we are made aware to the fact that now a total of four students have been sent home for wearing the pro-Jesus anti-Islam shirts. Dr. Terry Jones the Senior Pastor of the Dove World Outreach Center who follows my site has told me that the Church is selling the shirts.

More children from the Dove World Outreach Center arrived Tuesday at area public schools with shirts bearing the message "Islam is of the Devil" and were sent home for violation of the school district's dress code when they declined to change clothes or cover the anti-Muslim statement on their clothing.

School district staff attorney Tom Wittmer said the shirts violated a district ban on clothing that may "disrupt the learning process" or cause other students to be "offended or distracted."

"Students have a right of free speech, and we have allowed students to come to school wearing clothes with messages," Wittmer said. "But this message is a divisive message that is likely to offend students. Principals, I feel reasonably, have deemed that a violation of the dress code."

On their front, the T-shirts had a verse from the Gospel of John: "Jesus answered I am the way and the truth and the life; no one goes to the Father except through me," and this statement, "I stand in trust with Dove Outreach Center." The message "Islam is of the Devil" is on the back of the shirt.

Dove Senior Pastor Terry Jones said no local company "had the guts" to print the shirts. Dove member Wayne Sapp said he then ordered the shirts over the Internet from a company that allows individuals to design their own shirts. His daughter, Faith Sapp , 10, was the Talbot Elementary student sent home Monday. She said she was allowed to wear the shirt to school on Tuesday - with the Gospel message on the front visible but the anti-Islam message on the back covered.

He added that his children decided it was time to "stand up for what they believe instead of saying the rules might not let me do it" and said that society has grown "so tolerant of being tolerant" that free speech is eroding.

Link to Article
Posted by Christopher Logan at 10:27 AM

It cannot have effect in reality, that is what I consider.

It can't really have success, I suppose like this.