US Military Leaders Bowing Down to Islam

As I write this article I want to make it clear that I don't blame the US Military as a whole for this. This is directed towards the decision makers, who clearly do not understand two things. The first is Islam itself, and the second being that catering to Muslims does not work. It just leads to non-Muslims becoming more like Muslims.

"Our messages lack credibility because we haven't invested enough in building trust and relationships, and we haven't always delivered on promises," he added.

Does Adm. Mullen even begin to realize that non-Muslims have been reaching out to Muslims for centuries? Obviously it does not change things as the threat of Islamic takeover has spread across the world and is even in our own backyard.

Adm. Mullen has even gone as far as to say that the Islamic world demands appreciation and that we need to show it to them. This approach sounds awfully familiar. Take a good look at the UK to see how well bowing down to Muslims has worked out.

Mullen said the Muslim community is "a subtle world" that demands appreciation. The U.S. must demonstrate that appreciation if it wishes to succeed at supplanting the "extremist narrative."

Unfortunately Adm. Mullen is not the only military leader who has gone down this path. Maj. Gen. Jeffery Hammond, commanding general of the 4th Infantry Division has become a mouthpiece of Islam, as he is promoting it to his troops.

At the Fort Carson military base in Colorado, Maj. Gen. Hammond actually brought in local Muslim leaders to "educate" thousands of US soldiers on Islam.

"We want to talk to (soldiers) about this beautiful religion", Hammond said at the one-hour meeting... 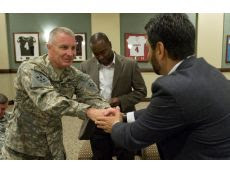 Does Maj. Gen. Hammond think that extortion, lying, rape, and terrorism are beautiful? Because Islam allows all of these things. Did the local Muslims who came to the base to "educate" our troops happen to mention these facts? Of course not.

As usual Muslims have an endless list of demands and as usual our leaders fall for it over and over again.

Hammond agreed with the Muslim leaders that greater cultural sensitivity is needed, and he said he wants the Army and Muslim leaders to continue working together to teach soldiers about Islam.

Maj. Gen. Hammond also has not realized the major differences between the non-Islamic world and the Islamic world.

"This is a great step forward," he told Hammond. "We have more in common than we know."

To be honest Maj. Gen. Hammond sounds more like a politically correct politician than a military leader.

The act of catering and being "sensitive" to Muslims has hit the battlefield in Afghanistan. As female US Marines are donning headscarves in an effort to get Muslims to like them. 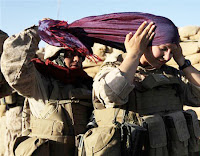 If non-Muslims have to act like Muslims and even promote Islam as Maj. Gen. Hammond is doing to get them to like us, we shouldn't be there in the first place. As this is not promoting freedom, it is playing into the hand of a religion that calls for the dominance of non-Muslims. Unfortunately this will never work, just ask India and Israel.
Posted by Christopher Logan at 8:16 AM

It can't work as a matter of fact, that is what I consider.

Hey, there's a great deal of helpful information above!