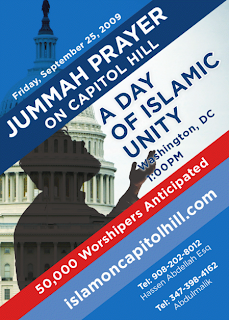 Inspired by President Obama's pro-Islamic speech in Cairo, approximately 50,000 Muslims are expecting to attend a prayer service outside Capital Hill. They claim that this is about them loving America. If they really loved America as we know it, they would be in the streets protesting against the Sharia push, and the Islamic preachers of hate in America. But they do not, this is all about them pushing Islam on America.

A mosque in Elizabeth, Dar-ul-Islam, is spearheading a national prayer gathering next month in Washington, D.C., that organizers are billing as the first event of its kind -- organized prayer for tens of thousands of Muslims outside the U.S. Capitol building.

The event will not include political speeches or placards, just prayer, said Hassen Abdellah, president of Dar-ul-Islam and a main organizer of the event, which is scheduled for Sept. 25.

"Most of the time, when Muslims go to Washington, D.C., they go there to protest some type of event," Abdellah said. "This is not a protest. Never has the Islamic community prayed on Capitol Hill for the soul of America. We're Americans. We need to change the face of Islam so people don't feel every Muslim believes America is "the great Satan,' because we love America."

A permit from the Capitol Hill police, granted July 28, allows access to the area by the West Front of the Capitol building from 4 a.m. to 7 p.m. on Sept. 25, but the main gathering will occur at 1 p.m., for the Friday prayer service.

Abdellah said he expects 50,000 people to attend, from mosques around the country, though non-Muslims are welcome, too. About 400 people are expected from his own mosque, which is raising money from donors to help pay the cost of the event, expected to surpass $200,000.

The gathering will occur by the site where presidents have been inaugurated since 1981. In fact, it was President Obama's words at his inauguration in January, and then his speech in Egypt in June, that led Abdellah and an area imam, Abdul Malik, to begin discussing the idea, Abdellah said.

"For the first time in my lifetime," Abdellah said, "I heard someone of his stature speaking about Islam and Muslims not in an adversarial sense, but in the sense of being welcome and acknowledging we are integral citizens in the society -- that we're gainfully employed, we're educated."

The website set up for the event, islamoncapitolhill.com, features a logo with a red, white and blue hand shaking a light brown hand, with the words to the preamble of the Constitution and a page of Arabic text in the background.

Mosque members have been working since July to organize the event, through e-mails, phone calls and visits to mosques and Muslim Students Associations in different states.

Link to Article
Posted by Christopher Logan at 6:56 PM

Gosh, there is so much useful data above!

Oh my god, there's so much worthwhile information here!

This can't have effect in actual fact, that's exactly what I suppose.