Occasionally readers send me Islamic propaganda that they have received as an email.
In the past I have posted an Al Qaeda recruitment email that is being spammed to African email addresses. Today the email is about the "two-state solution" between Israel and the Palestinians, in which the Muslim who wrote this is completely against. Obviously they have the same views as Hamas does.

"two states solution " , is no solution ! 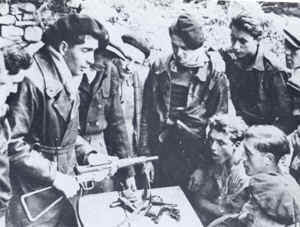 The French-Resistance,
did not negociate for Peace.....

Some are planing and promoting
The Two States Solution :
1- the State of Israel
side by side with,
2- the Occupied and castrated State of Palestine

Personally , I am for the Arab State of Palestine
where , who ever is not an Arab , nor does he feel as such,
may go back to where he came from !!!

In case ,a non-Arab accepts and respects
the Palestinian- sovereignty over Palestine ,
he or she may stay......
like in South Africa or in today's Hong Kong ,
or Algeria after the liberation
or Egypt after Nasser.


In the meantime , any peace-negociations have
only made the Arabs to loose their time
and made the State of Israel gain some roots on our soil.......


Therefore ,
please, pick up a Kalashnikov and then ,
join Hamas , DFLP, PFLP or Hezbollah
and see how close you come to Peace, after the Liberation.


Raja Chemayel
Peace comes after a Victory !!
Posted by Christopher Logan at 11:09 AM