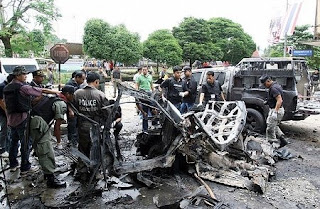 Almost everywhere that we look, from Thailand to Russia, to Iraq, we continue to see violence in the name of Islam. Violence that will not end, as the war with Islam is forever.

Allah’s Apostle said, “I have been ordered to fight the people till they say: ‘None has the right to be worshipped but Allah.’ And if they say so, pray like our prayers, face our Qibla and slaughter as we slaughter, then their blood and property will be sacred to us and we will not interfere with them except legally and their reckoning will be with Allah.” Narrated Maimun ibn Siyah that he asked Anas bin Malik, “O Abu Hamza! What makes the life and property of a person sacred?” He replied, “Whoever says, ‘None has the right to be worshipped but Allah’, faces our Qibla during the prayers, prays like us and eats our slaughtered animal, then he is a Muslim, and has got the same rights and obligations as other Muslims have.”

The blast was one of the most serious for months in the kingdom's insurgency-plagued provinces bordering Malaysia where a bloody separatist rebellion has been raging for more than five years.

The 50-kilogramme (110-pound) device was hidden inside a stolen Toyota pick-up truck and exploded during the busy lunch hour in the centre of Narathiwat, the main town in the province of the same name, officials said.

He said that seven of the 42 people injured in the blast were in a critical condition. Most of the wounded were Buddhist government officials, who are often targeted by the Islamist militants in the region.

Police and rescue workers were rushing the wounded to hospital and the local government chief was among those injured, a policeman said on condition of anonymity.

The timing of the attack just after the start of the Muslim fasting month of Ramadan was "very interesting", said Sunai Phasuk, an analyst for Human Rights Watch in Thailand.

"We are in the holy month of Ramadan and the bomb went off clearly to harm the non-Muslim population," he told AFP.

"It shows the insurgents are avoiding causing collateral damage to their fellow Muslims, because they would come after the end of fasting."

He said this Ramadan was "marked with violence from day one". Over the weekend, eight people, including two soldiers and three security volunteers, were killed by suspected insurgents.

"It seems they use Ramadan to symbolise the cleansing of non-Malay Muslims," Sunai added.

Link to Article
Posted by Christopher Logan at 10:46 AM