Muslim fan Mail:Sharia Practiced From the Time of Adam 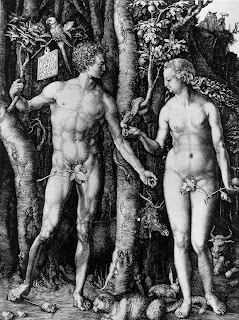 That is not my statement, that is what I was told by a Muslim. The other day I posted an article entitled "Clinton:We Support the Sharia Govt of Somalia~Increases aid" In my commentary I made the following statement "sharia is based on a discrimination against women and non-Muslims" Here are a couple of sources that back me up.

According to an email I received from a Muslim subscriber, I am wrong about Sharia Law discriminating against women and non-Muslims. (Though he provides no proof of this.) To top it off by some magical time traveling miracle Sharia Law was practiced even before Islam existed. From the time of Adam. Now that is some trick!

YOUR STATEMENT ON " SHARIA IS BASED ON
A DISCRIMINATION AGANIST WOMEN AND NON MUSLIM"
IS TOTALLY WRONG , MISINFORMED AND MISLEADING APART FROM BEING
NOT EDUCATED ON MATTERS RELATED TO ISLAM
, SUGGEST YOU GET YOUR FACTS CORRECT AND ACCURATE .
SHARIA IS FREEDOM FOR THE MINDS , SPIRIT , PHYSICAL AND EMOTIONAL ASPECTS OF MANKIND AS THEY ARE BASED ON THE LAWS OF NATURE AS REVALED IN THE HOLY QURAN , PRACTISED BY THE PROPHETS , FROM THE TIME OF ADAM TILL MUHAMMAD PEACE BE UPON HIM , AND ENRICHED BY THE LEARNED MUSLIM THINKERS , AND SCHOLARS. IF YOU ARE NOT ANY ONE OF THEM DO NOT WRITE ABOUT SHARIA, LOOKS STUPID!

My response to this statement was this.

Non-Muslims and Muslim women have less rights than male Muslims under Sharia law.
Sharia law did not exist from the time of Adam and was never practiced by him. That is just a ridiculous statement.
You should really learn to think for yourself and not act like Muslim "scholars" are the only people who can understand Islam. It is really not that complicated.

Here is the return email to me.

what do you understand by the word " syaria" and the difference with " syariah"?

I stated that "I am talking about Islamic law"

ok, then go to Al Azhar University, Egypt and really study the islaimic law and not just state matters that are not islamic in spirit and in practice. And just looking from the internet on islamic knowledge is just not enough , as we have to be face to face with the " guru" to really know the truth.of the islamic law , more so on matters related to women. pardon me if you feel offended after all to err is human. but I have stated by stand. peace to you
salam in arabic . If you are interested be part of my team in TUMU read attachment for the TUMU international conference papers. cheers

In response I sent back this email.

Abu, I do not feel offended and I know about that University. The Muslims of Egypt have persecuted the Coptic Christians there for centuries. That country is nothing to be proud of.

The Egyptian con and Obama~Videos.

It is a fact that Islamic law discriminates against women and non-Muslims. Islam calls for the domination of non-Muslims. Either you have be lied to, or you are trying to con me.

Here is the deal, if Muslims want to live under Islamic laws, they do not belong in the West. We don't have to turn our lives upside down to please pro-Sharia Muslims.

Since I do not know you, I am not willing to click on the link. Nothing personal.

Then as usual, when the con does not work we see the true colors come out.

YOU DO NOT HAVE TO MAKE A DEAL WITH ME , THE WHOLE WORLD IS GOD'S LAND AND ALL HUMANS CAN STAY WHERE THEY LIKE IT IS A MATTER OF TIME THE WEST SHALL BE ISLAMISE BY MEN OF UNDERSTANDING.AS ISLAM IS ON THE RISE BY NATURAL INSTINCT AND BASIC KNOWLEGDE. YOU DO NOT HAVE TO BE IN EGYPT TO STUDY ISLAM BUT FIRST TRY TO GET THE TRANSLATION OF THE HOLY QURAN BY YUSOF ALI , FROM THERE YOU WILL KNOW WHER YOU STAND . YOU CAN DELETE THE ATTACHMENT IF YOUR COMPUTER IS JAMMED BY IT.
CHEERS
ZAHRIN

Here is my final response.

I see, you are just another self centered Muslim who does not care about the beliefs of non-Muslims and most Westerners are not willing to convert to Islam. I have read that version and I stand against your religion trying to takeover.

As we see some Muslims will say anything to try and con us. Don't be fooled, Islam is not a friend of freedom loving people.
Posted by Christopher Logan at 10:56 AM

Yes. Muslims practice "Taquiyah". It is the permission to lie to unbelievers and apostates about anything so they can win.

Good that you published this.

thats a common muslim belief. for a so-called expert on islam you sure dont know the basics

From what I have read, it seems this muslim is the kind that frequent Youtube. First they try to discredit you.
Then they tell you to learn all about Islam.
Then they say you have the incorrect translation.
Next they try to blame other religions and finally...
they will attack you.
Muslims have never had to defend their religion before,

Now they do...and they are scared.

Boy oh boy, Christopher. You sure can smoke these guys out.

And BlackbootJack you've got them pegged dead to rights.

Anon 1 - it is good that Islam in Action posted this, isn't it?

Anon 2 - if you came here more frequently you would know that our host is quite familiar with taquiyah. But thank you for playing.

Anonymous,
I didn't say that other Muslims did not believe this, did I? I know that many Muslims believe that everyone was born a Muslim. I know that they say that Adam was the first prophet of Islam. The statement in the article is just ridiculous, as Christianity was around long before Islam. Which means that there was no Sharia law back then. Adam was not preaching Sharia law. Keep trying.

@O1.1
Retaliation is obligatory (A: if the person entitled wishes to take it (dis: o3.8) against anyone who kills a human being purely intentionally and without right. (O: Intentionally is a first restriction and excludes killing someone through an honest mistake, while purely excludes a mistake made in a deliberate injury (def: o2.3), and without right excludes cases of justifiable homicide such as lawful retaliation.)
@O1.2
The following are not subject to retaliation:
-1- a child or insane person, under any circumstances (O: whether Muslim or non-Muslim.
The ruling for a person intermitently insane is that he is considered as a sane person when in his right mind, and as if someone continously insane when in an interval of insanity. If someone against whom retaliation is obligatory subsequently becomes insane, the full penalty is nevertheless exacted. A homicide committed by someone who is drunk is (A: considered the same as that of a sane person,) like his pronouncing divorce (dis: n1.2) );
-2- a Muslim for killing a non-Muslim;
-3- a Jewish or Christian subject of the Islamic state for killing an apostate from Islam (O: because a subject of the state is under its protection, while killing an apostate from Islam is without consequences);
-4- a father or mother (or their fathers of mothers) fir killing their offspring, or offspring's offspring;
-5- nor is retaliation permissible to a descendant for (A: his ancestor's) killing someone whose death would otherwise entitle the descendant to retaliate, such as when his father kills his mother.

@O4.2
The indemnity for killing a male Muslim is 100 camels.
(N: Shafi`i scholars early converted the pastoral equivalents to gold dinars (n: one dinar equalling 4.235 grams of gold (dis: w15) ), the amount due in the rulings below being the weight of the gold, regardless of its current market value.) (A: The stronger position in the Shafi's school is that indemnities should be reckoned in camels, after which both parties may agree on a lesser amount or another form of payment.)

How nice of them to allow Jews and Christians to kill apostates of Islam.

It is baffling that someone living in the 21st Century would defend Sharia Law. From "The Reliance of the Traveller," mentioned above, here is a sampling of Shari’a Laws that clearly violate the U.S. Constitution and state laws:

Only the most primitive of peoples would embrace these draconian laws.

Chris you are absolutely correct. Just look at history and what the Muhammadans did the People of the Book after they rejected him. Muhammad was a sore loser and rained the wrath of his allah down on unsuspecting innocents.

The Qur'an was delivered to Muhammad piecemeal form 610 - 632. The Surah 9 was believed to be the last recitation. No record of order of deliverance or themes were kept during the life of Muhammad,

The Qur'an was passed down orally, memorization and recitation of Qur'anic passages was esteemed practice over Bedouin campfires from the start.

Muhammad suffered much humiliation early on. As he preached monotheism to the pagans of Mecca, who incidentally worshiped about 360 gods, including allah, at the Kaaba, they did not like him upsetting their ways. Muhammad was eventually run out of Mecca, went to Medina and after gathering followers, went back to eventually conquered Mecca, clean up the Kaaba, discharge the other gods and placed allah as their god.

I suspect that the reason that Muhammadans, through the teaching of their Muhammad have "us" vs "them" because of dominance and submission of certain Qur'anic passages.