Florida Anti-Islam Church Steps it up a Notch! 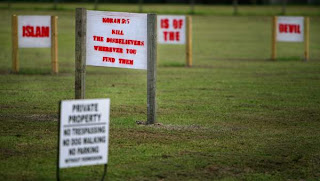 Just days ago the terrorist supporters from the Council on American Islamic Relations (CAIR), complained about the anti-Islam signs outside of the Dove World Outreach Center in Gainsville Florida. Not only did the Church not take down the original signs, they have bravely added another one.

Just for the record, each time the Church put up a sign, the liberal Gainsville Sun went running to CAIR for answers. Obviously they have done no research on CAIR or Islam. They have even banned me from leaving comments on their site.

New Dove World Outreach sign again takes aim at Islam
A violent verse from the Quran is displayed, but an Islamic expert says the church's sign does not use the common wording and is taken out of context.

August 1, 2009
A new sign paraphrasing a quote from the Quran has been placed in front of the Dove World Outreach Center in northwest Gainesville, where an earlier anti-Islamic sign has stirred protests.

The new sign reads "Koran 9:5 Kill the disbelievers wherever you find them." It joins a series of signs that read "Islam is of the devil," which were placed in front of the church recently.

A church pastor could not be reached Friday for comment.

Ramzy Kilic, Tampa's executive director of the Council on American-Islamic Relations, who met Tuesday with Dove World Senior Pastor Terry Jones, said the new sign's message is not the common wording on that Quran verse and added it has been isolated from a broader context.

"Anyone, Muslim or non-Muslim, can take a verse, isolate it and almost formulate it to an idea they want to convey," Kilic said. "When you take something out of context, you are not appreciating the true message of the religion."

Kilic added, "With the sign, it seems like (Jones) is antagonizing Muslims and wants to continue spreading a message of hate."

Jones told The Sun in July that the initial sign was "an act of saying there is only one way, and that is actually what Christianity is about. It is about pointing the people in the right direction, and that right direction is Jesus and only Jesus."

Link to Article
Posted by Christopher Logan at 4:44 PM

Not only did the Church not take down the original signs, they have bravely added another one.

I despair for the future if the world continues to have such bigoted and moronic people in it such as are on exhibit on these pages.

If the two people who made the last two comments were against bigotry, they would be against Islam. They need to educate themselves.

Anonymous, anytime you want to debate you just let me know.

Your insults show your ignorance on the issue.