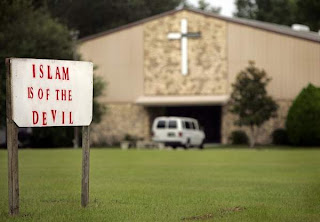 When I first started speaking out against Islam many people stayed silent because it was the politically correct thing to do. Those days are slowing coming to an end.

For the record I placed a call to the Church and they clearly know about the threat the Islam brings to the West. Stating that it might even be too late for the UK.

Those behind a sign posted in front of their northwest Gainesville church, proclaiming in red letters "Islam is of the devil," say it's a way to express their religious beliefs and is a message of "a great act of love."

Some living near the Dove World Outreach Center, however, are outraged and disappointed with the sign's message, which has sparked protests and acts of vandalism at the church since it was posted over the weekend.

The church has received about 100 calls in the past 24 hours about the sign, Jones said. One was positive, he said Tuesday.

Since the sign went up, it reportedly has been protested by picketers, successfully torn down in another expression of protest late Sunday, quickly re-erected on Monday, and marred by spray paint before it was repainted and back in place Tuesday morning.

Jones said the acts of vandalism will be reported to police and that there are no plans to remove the sign or change what it says.

"We actually posted the sign because there is a tremendous growth in Islam at this time. It is a violent and oppressive religion and does not have anything to do with the truth of the Bible," Jones said. "We are definitely trying to send the message that Jesus Christ is the only way."

The church's first sign won't be its last, Jones said.

In the future, the message on the sign might change to express the church's beliefs against same-sex marriage or abortion, Jones said. The church also has posted messages on YouTube, he said.

Disapproval for the sign involves some living near the church, who said they were shocked the church would post something they consider to be so divisive.

"When we originally saw it, we were initially very offended. Someone took it down sometime on Sunday, but it was back up on Monday," Aubrey Davies said. "We're sad it is up. It is such a divisive message when it (the sign) could be used to put out a statement of unity."

Laura Roberson, who has lived in the neighborhood for about 11 years, said she has long been curious about the church. When Roberson saw the anti-Islam sign on Monday, she said she was shocked.

"At about 9 p.m., my husband went out for sodas and saw someone had spray-painted over it, but it was brand new and clean again this morning (Tuesday)," Roberson said.

The church was founded in Gainesville in 1986, according to its Web site - www.doveworld.org. Jones said he had been on its board for many years, and when its original founder died, he was asked to take over. Jones, 58, said he came to Gainesville from Cape Girardeau, Mo., at the end of 2001.

Dove World Outreach, which Jones said is a nondenominational, charismatic church, runs the Lisa Jones House, an outreach effort that provides necessities such as furniture, food and clothing.

Jones said, in spite of what the sign says, the church's outreach effort doesn't look at a person's faith when it comes to offering help.

Anyone in need can come and receive free food and clothing, he said.

"We are in no means in that way prejudiced or against them," Jones said.

While the church will continue to make its outreach program available to all people, its message emphasizing the Bible and a belief in Jesus Christ remains firm, he said.

Link to Article
Posted by Christopher Logan at 5:52 PM

Pretty worthwhile data, lots of thanks for your post.