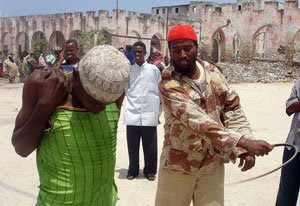 Recently in Somalia there were amputations for theft and now in the continued ugliness of Islam, the beheading of those who left Islam. How long will it be until the stone throwing Somalians in Minnesota started killing people here?

MOGADISHU, Somalia – Somali Islamist insurgent fighters beheaded seven people accused of abandoning their religion and of espionage, residents said Friday, in the largest mass execution since the Islamists were chased from power two and a half years ago.

The execution follows weeks of bloody fighting for control of the capital and at a time of mounting concern over the influx of hundreds of extremist foreign fighters into the war-ravaged Horn of Africa nation.

Resident Madey Doyow said he saw seven headless bodies in a truck being guarded by militia members in the southwestern town of Baidoa.

"The people who were guarding the vehicle told us they were beheaded for violating Islamic law," he said. The executed had come from different parts of the southwestern Bay and Bakool regions, he said, adding that the guards told him some were linked to pro-government militias.

A woman named Miriam, who asked that her last name be withheld to protect her from reprisals, sobbed as she said in a phone call that four bodies, including her husband's, had been brought to the police station in Baidoa. The location of the other three was unclear.

Hawa, a woman who also wanted her full name withheld, was at the police station in Baidoa along with other families who had been informed a relative was executed. She told the AP that her brother had been missing for about 20 days after being abducted from his house by masked men, and that she had just been informed that he had been beheaded.

Al-Shabab militia officials told her that the seven had been accused of either renouncing the Islamic religion or spying for the transitional government, she said.

The executions fit a broader pattern of torture and unlawful killings by various factions of the militia, said Benedicte Goderiaux, a Somalia researcher for Amnesty International.

Last month the militia amputated a hand and foot each from four men accused of theft in the capital of Mogadishu. Another man accused of rape and murder was stoned to death in a town south of the capital last month.

Link to Article
Posted by Christopher Logan at 10:32 AM

The writer is totally fair, and there's no doubt.

Thank you for the article, very worthwhile material.