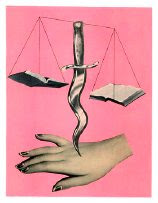 This article presents two opposing viewpoints on whether the Netherlands should allow Sharia Courts like the UK has. The person against the courts is a Muslim woman, while the person in favor of them is non-Muslim Maurits Berger, a so called expert on Sharia. I believe that Mr. Berger should mind his own business here. Things with Islam in the Netherlands are bad enough already.

Help Muslims escape the tyranny of sharia law
10 July 2009
Would it be such a terrible thing if sharia courts existed in the Netherlands? Yes, says Nahed Selim, we have to stop giving in to the Islamic fundamentalists. No, says Maurits Berger, we already have Jewish and Catholic 'courts'.

By Nahed Selim
Sharia law in the Netherlands may not be practised in an actual 'sharia court', but that makes little difference. The point is that Islamic rules about marriage, divorce, custody, parental authority, alimony and inheritance are being implemented according to the sharia, and that these contradict Dutch law.

The clearest example of this is polygamy. Marriages are made and dissolved in mosques in the Netherlands, including polygamous marriages. On September 19, 2008, newspaper De Telegraaf reported that 173 men in Amsterdam are registered as having two legal wives, two men even have three wives. A spokesperson for the city of Rotterdam admitted in NRC Handelsblad last year that polygamous marriages are being registered in that city on an almost weekly basis.

It's a pity that the national statistics bureau automatically rejects these marriages because it thinks they're mistakes. Because of this there are no national data about polygamy in the Netherlands. (Non-registered polygamy is probably even much wider-spread.)

The same goes for marriages with underage girls. They are mostly not registered, but sometimes they are. Either way, according to the national statistics bureau they don't exist.

In a way, we already have two parallel legal systems: some things are illegal for non-Muslims but not for Muslims. This is typical of the Dutch attitude towards the Islamisation of Dutch society. Things are happening that the government doesn't know about or doesn't want to know about. They just throw away the statistics, case closed.

Verdicts by imams should not be tolerated by Dutch society even if they happen in the backrooms of mosques. That Catholics and Jews do the same thing, as Berger says, is up to them. Presumably their 'courts' do not impose decapitation for heretics or homosexuals, or condone disobedient wives being beaten up by their husbands.

For everything in sharia law is discriminatory against women: marrying a non-Muslim is not allowed, divorce is not allowed unless the husband agrees to it. The man, for his part, can disown his wife whenever he wants. (A sharia court in Malaysia has ruled that a text message saying 'I disown you' suffices.) If he changes his mind within three months, he can take his wife back. He can do this up to three times. Custody always goes to the father: the mother may raise the children, but he always has the final word.

There are thousands of divorce cases in Islamic countries waiting for a ruling by a sharia court. Needless to say, these are divorces instigated by women. Men don't need the approval of a court in most Islamic countries.

For all these reasons I oppose sharia law in the Netherlands. According to sharia law, a woman is worth only half a man. When she inherits she gets only half what her brother gets. In a court case, her testimony is worth half that of a man.

We can't let this happen in the Netherlands. Mosques practising sharia law should be closed down. The minister claims there is no legal ground to do so, but there is: the European court in Strasbourg on February 13, 2003 ruled that sharia law violates the principles of democracy. The ruling came as a result of an appeals case brought by the banned Turkish Refah party against the Turkish state.

This verdict should provide plenty of legal ground for the Dutch authorities to close down mosques that have effectively introduced sharia law. The European ruling takes precedence over Dutch courts.

Link to Article
Posted by Christopher Logan at 5:34 PM