Bosnia 'a haven for Islamist terrorists' 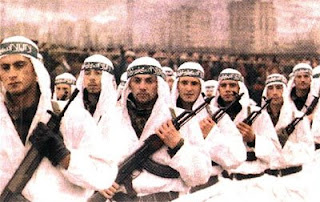 Recently VP Joe Biden went over to Bosnia and told them to play nice, but apparently they do not care what he had to say.

“There are about 80 prominent names in the world of terrorism, protected by a new identity,” Galijasevic said.

Bosnia came under the spotlight this week after a convicted criminal and terror suspect of Tunisian origin, Karray Kamel bin Ali, known as Abu Hamza, escaped from a Bosnian jail.

“Bosnia is a base for Islamic terrorists who live here in safety, operate training camps and prepare cadres for attacks in third countries,” said Galijasevic.

Galijasevic, himself a Muslim, recently formed a team of experts to combat terrorism. The team includes a Croatian colleague, Domagoj Margetic, and Serbian expert Darko Trifunovic.

Thousands of militants like Bin Ali, came from Islamic countries to fight on the side of local Muslims in 1992-1995 civil war. But after the war, many married local women, acquired Bosnian citizenship and remained in the country under their own or assumed names, Galijasevic added.

He pointed out that Algerian militant Abu Mali, even worked in the Bosnian mission to the United Nations after the war under a Bosnian name, Safet Catovic.

Trifunovic, a Bosnian Serb, who also worked in the mission at the time, said he became suspicious of who Catovic really was because he spoke poor Bosnian. As a result, Trifunovic said he lost a job in the mission and moved to Belgrade.

But he said Abu Mali remained in the United States where he kept ties with terrorist groups and even operated terrorist training camps. Abu Mali allegedly commanded the “El Mujaheed” unit of Islamic fighters in Bosnia which allegedly committed some of the worst crimes against Serbs and Croats, but no one was ever prosecuted.

Individuals with Bosnian passports had been involved in almost all terrorist attacks this millennium, from the 2001 attack attack on World Trade Center in New York to the 2004 Madrid train bombings, Galijasevic pointed out.

Abu Hamza failed to return to jail in central Bosnian city of Zenica on Monday, after a week’s leave, and both Galijasevic and Trifunovic agreed it was a big test for Bosnian authorities. They said the escape was well planned and organised, expressing doubt that he will be found.

Hamza had been sentenced in Tunis to 12 years for terrorist activities and served a seven years sentence in Bosnia for murder and racketeering. He was currently serving a four year sentence for assault and domestic violence.

“Most likely, the next time we hear about him will be when a new terrorist group is arrested somewhere in the world,” Trifunovic told Adnkronos International (AKI).

Link to Article
Posted by Christopher Logan at 8:35 AM