UK:Muslims Could get own Police 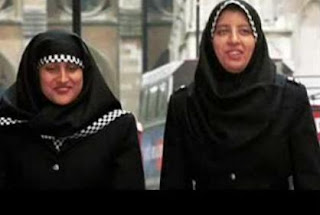 The legal system in the UK has constantly catered to Muslims. They already have their own Sharia Courts and now they might get their own religious police division. But nothing the Brits do surprises me anymore.

MUSLIMS COULD GET OWN POLICE
Thursday July 23,2009
By Katherine Fenech
MUSLIM crime victims could gain the right to have their cases overseen by police from their own religion, it emerged last night.

Police in London already give victims the right to ask for a Sikh officer to be involved in an investigation but the scheme could be introduced for other religions elsewhere.

Chief Supt Joanna Young, from the Met’s Criminal Justice Policy Unit, said: “If it’s a success, I would encourage the other (police) associations to do likewise.”

The project is intended to help investigate “honour” killings and forced marriages but Metropolitan Police Federation chairman Peter Smyth said: “We’re stretched thin enough already. Are Sikh officers going to have their rotas changed so there’s always one on duty?

“It’s political correctness gone mad. We talking about the creation of a separate force within a force.”

But Palbinder Singh, chairman of the Metropolitan Police Sikh Association, said: “I don’t believe a white officer is ever going to be fully conversant with a Sikh.”

Link to Article
Posted by Christopher Logan at 9:04 AM