US Drowning in Debt, Obama Sends Money for Palestine Deficit 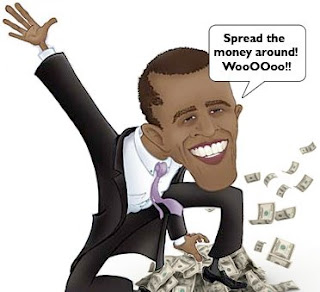 Although President Obama has admitted that we are out of money, he somehow found $200 million to keep his pledge to the Palestinians. How sweet of him.

US transfers $200 million in aid to Palestinians
By KARIN LAUB

Palestinian Prime Minister Salam Fayyad has been struggling in recent months to keep his government afloat, borrowing hundreds of millions of dollars from commercial banks just to cover the public payroll.

The reasons for the shortfall include Israel's restrictions on the Palestinian economy, the border blockade of the Hamas-ruled Gaza Strip and the failure of some donor countries to make good on their aid pledges, Fayyad said Friday, in a video conference with Clinton.

With Friday's aid transfer, donor countries have given the Palestinian government $606 million in budget support this year, covering only about one-third of the estimated deficit of $1.45 billion for 2009, Fayyad said.

"We have received aid, but not enough to deal with our needs, and we faced sharp economic difficulties throughout the last months," Fayyad told reporters.

Link to Article
Posted by Christopher Logan at 6:48 PM