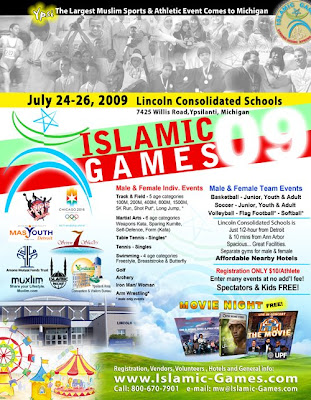 Recently we saw a video exposing how Muslims in Michigan oppressed and attacked Christians at the 14Th annual Arab International Festival. Now on July 24-26 Muslims will hold the Islamic Games 09 in the Islamic capital of the USA, Michigan. The main goal of the event is to strengthen the Muslim community. Like I have been saying, they are not here to assimilate, they are here to stick together, expand, and eventually try and take over. 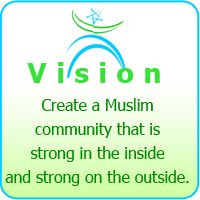 The Islamic Games was initially held in the late 80’s and early 90’s. After some years, as the Muslim population increased and their needs grew, the Islamic Games embarked to operate at a higher level to accommodate the expansion. Many more events, certified officials, appropriate venues, and a greater participation lead the Committee to build an organization that would ensure that the Islamic Games is presented professionally while becoming a major annual attraction for North American Muslims.

The Islamic Games is somewhat like the PanAm Games or the Asian Games or the Commonwealth Games; it brings athletes of the similar denomination to compete and network with each other. In this instance, the Islamic Games provides a forum for Muslim athletes and teams to participate in sports and athletics with others in a Halal environment. Islamic Games plans to host regional games in the USA that would culminate at a National Islamic Games.

The Islamic Games also provides an ideal opportunity for Muslim companies as well as companies interested in the American Muslim market to gain ready access to the Muslim community. With the growing interest and increasing attendance at Islamic Games events sponsorship and vending are very lucrative opportunities.

Thanks for this article, really worthwhile material.

Hi, nice post. I have been wondering about this topic,so thanks for sharing. I will certainly be subscribing to your blog.