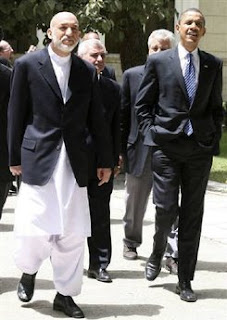 Since President Obama took office he has already tightened up the rules on our brave troops over in Afghanistan. Now his buddy Afghanistan President Karzai has stated that if he wins the upcoming August election he wants to tighten up the rules some more. I say enough with the politically correct wars. Let them take the gloves off or bring them home.

KABUL – President Hamid Karzai said Monday he wants new rules governing the conduct of U.S.-led forces in Afghanistan and would be willing to talk with Taliban leaders who publicly renounce violence and endorse peace.

But Karzai, acknowledging shaky relations with his international partners in the war on terror, told The Associated Press in an interview that he was not prepared at this time to discuss the key Taliban demand — a timetable for the withdrawal of all foreign troops.

Karzai said the presence of U.S. and international forces was in the Afghan national interest but should be "based on a new contract" that would minimize civilian casualties, limit searches of private homes and restrict detaining Afghans indefinitely without charge.

He also said he wants the U.S.-run prison at Bagram Air Base, where about 600 Afghans are held, re-evaluated and inmates released unless there is evidence linking them to terrorist affiliation. He said arrests are turning ordinary Afghans against U.S. and NATO forces.

Karzai has promised to pursue those demands for changes in the relationship with foreign forces if he wins a second term in the Aug. 20 presidential election. He is considered the leading contender in the 39-candidate field, though he would be forced into a runoff if he fails to win a majority of votes in the first round.

But he added that the partnership must ensure "that the partners are not losing their lives, their property, their dignity as a consequence of that partnership."
A Taliban spokesman, Qari Yousef Ahmadi, rejected the idea of talks, saying the militants would not discuss a cease-fire with any government that was a "servant of the foreigners."

Link to Article
Posted by Christopher Logan at 8:10 AM