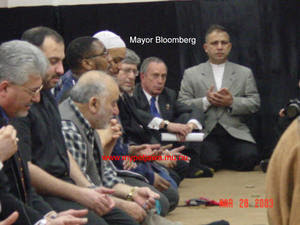 Although Mayor Bloomberg has stated that Islamic holidays will not be added to the NYC school calender, Muslims have not given up. Will the mayor cave in and reverse course?

NEW YORK (AP) — The stress of catching up on school work and having to ask for permission to miss classes for holidays is routine for Muslim students in New York City.

That's because the nation's largest school district hasn't sanctioned official Muslim holidays. A handful of school districts in New Jersey and Michigan have recognized them, while efforts in Baltimore and Connecticut failed recently.

This week, Mayor Michael Bloomberg spoke out against approving the holidays, saying it would open the door to other religious groups asking for days off. He later said he would take a closer look.

Link to Article
Posted by Christopher Logan at 11:07 AM