Exclusive!:Al Qaeda Recruiting Material From Africa~"The Beginning of the end, a Response to Barack Obama" 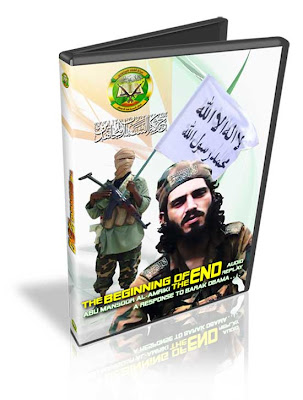 Before and after the election Obama supporters told us that his Muslim background would help ease the tensions between the Islamic and non-Islamic world. His supporters thought that his Cairo speech was going to transform the relations between the two worlds. Unfortunately this was just wishful thinking backed up by naivety.

Obama's has inspired one group though. He has inspired American Abu Mansour, one of the Somalian Al Qaeda leaders to speak out against America, Western civilization, and President Obama himself. This message was forwarded to me from a friend in Nigeria. He received this in his email as Al Qaeda is spamming African email addresses with this information in a recruitment drive. Here is the email and video entitled "The Beginning of the end, a Response to Barack Obama".


Thank Allah who promises his faithful worshipers of empowering, threats his enemies of lowness and dishonoring torture .
My Allah's prays on the honest prophets and missioners

The old manner become useless so the slave of the house comes to change the way of speech,
replace the violence of tender and the threatening of blaming

He recites the Holy Koran while he wearing the cross,
our nations are fascinated on him, he has the good answers for all the
questions till he owns all the minds .

Yes the deceive of America becomes most dangerous but Allah is the Greatest and the strongest,
America get birth a new generation; catch the strong rope of Allah so the American passports put under their feet,
and the unitizing flag flapped above them

On behalf of them

He is not Arabic tongue, believed in Allah, faithful to his destiny.
He was born and brought up in the sound of America but his faithfulness is to his Creator and master is bigger than to his country

Once the nations who claiming Islam clapped their hands to the slave of the house, the son of America ;
Abu Mansour said "the days of deceiving Muslims are faded , we understood the lesson and recognized it "

You wait us and we wait you….ring sounds to announce the beginning we will say loudly Allah is the Greater

It is the beginning of the end

A speech from mujahid Abu Mansour

Watch it directly on

Listen as Abu speaks out against Obama. While criticizing aspects of the West such as human rights, freedom of religion, freedom of speech, and minority rights.

I will post videos 2 & 3 over the next few days.
Posted by Christopher Logan at 2:41 PM

I believe BHO thinks he has a free pass against this threat because of his heritage. He is sadly mistaken, having Muslim training doesn't excuse him for being the leader of the supposed Great Satan - America, he would in my opinion be more likely to be attack for aligning himself with the US government. Although, it does appear at times he has mastered the art of Taqiyya very well. This is just one infidels opinion though.

It was hilarious when he said that Obama won because of his speeches.