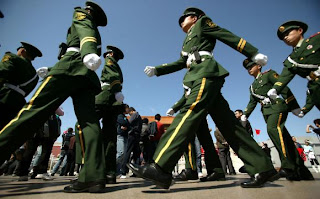 Most of us have read about Muslims rioting in numerous European countries. When the riots were over, Muslims who were in them were basically free to go about their business. Not in China.

The arrests come amid a security clampdown on the region, with hundreds of paramilitary police with shields, rifles and clubs taking control of the streets of the capital, Urumqi, where the riots took place on Sunday.

The violence does not bode well for China's efforts to mollify long-simmering ethnic tensions between the minority Uighur people and the ethnic Han Chinese in Xinjiang — a sprawling region three times the size of Texas that shares borders with Pakistan, Afghanistan and other Central Asian countries.

Mobile phone service and the social networking site Twitter have been blocked, and Internet links also were cut or slowed down.

A nonviolent protest by 200 people was broken up in a second city, Kashgar, and the official Xinhua News Agency said police had evidence that demonstrators were trying to organize more unrest in Kashgar, Yili and Aksu.

It said police had raided several groups plotting unrest in Dawan township in Urumqi, as well as at a former race course that is home to a transient population.
The unrest in Urumqi began Sunday after 1,000 to 3,000 protesters gathered at the People's Square and protested the June 25 deaths of Uighur factory workers killed in a riot in southern China. Xinhua said two died; other sources put the figure higher.

Internet and social networking reports on the incident had raised tensions in Xinjiang over the last two weeks.

Many Uighurs (pronounced WEE-gers) haven't been wooed by the rapid economic development. Some want independence, while others feel they're being marginalized in their homeland. The Han — China's ethnic majority — have been flooding into Xinjiang as the region becomes more developed.

The government often says the Uighurs should be grateful for the roads, railways, schools, hospitals and oil fields it has been building in Xinjiang, a region known for scorching deserts and snowy mountain ranges.

Link to Article
Posted by Christopher Logan at 6:58 PM

This is how fascists deal with fascists.

Thanks for the article, very effective information.

So, I do not really believe it will have effect.