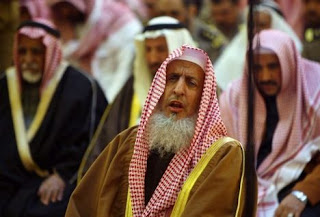 Saudi Arabia's most senior cleric Sheikh Abdul-Aziz Al Sheikh. has come out and stated that not allowing 10 or 12 year-old girls to marry is "unfair" to the girl. He has also stated that Islamic law has not done any "injustice to women". To normal people with morals this is called pedophilia and this all stems from the actions of Mohammad and Islam itself.

It's an injustice to NOT marry girls aged 10, says Saudi cleric

Ten-year-old girls are ready for marriage, according to Saudi Arabia's most senior cleric.

Sheikh Abdul-Aziz Al Sheikh, the country's grand mufti, told Al Hayat newspaper that those saying ten or 12-year-old girls are too young to marry are being 'unfair' to them.

Al Sheikh's comments come at a time when Saudi human rights groups have been pushing the government to put an end to marriages involving the very young and to define a minimum age for marriage.

In the past few months, Saudi newspapers have highlighted several cases in which young girls were married off to much older men or very young boys.

Sheikh Abdul Aziz Al-Asheikh, the Kingdom's grand mufti, prays during the funeral of the Saudi woman and her daughter last February

Though the mufti's pronouncements are respected and provide guidance, the government is not legally bound by them.

On Sunday, the government-run Human Rights Commission condemned marriages of minor girls, saying such marriages are an 'inhumane violation' and rob children of their rights.

The commission's statement followed a ruling by a court in Oneiza in central Saudi Arabia last month that dismissed a divorce petition by the mother of an eight-year-old girl whose father married her off to a man in his 50s.

Newspaper reports said the court argued that the mother did not have the right to file such a case on behalf of her daughter and said that the petition should be filed by the girl when she reaches puberty.

Responding to a question about parents who force their underage daughters to marry, the mufti said: 'We hear a lot about the marriage of underage girls in the media, and we should know that Islamic law has not brought injustice to women.'

The mufti said a good upbringing will make a girl capable of carrying out her duties as a wife and that those who say women should not marry before the age of 25 are following a 'bad path'.

'Our mothers and before them, our grandmothers, married when they were barely 12,' said Al Sheikh, according to the Al-Hayat newpaper.

There are no statistics to show how many marriages involving children are performed in Saudi Arabia every year.

It is also not clear whether these unions are on the rise or whether people are hearing about them more now because of the prevalence of media outlets and easy access to the Internet.

Activists say the girls are given away in return for hefty dowries or as a result of long-standing custom in which a father promises his infant daughters and sons to cousins out of a belief that marriage will protect them from illicit relationships.

Link to Article
Posted by Christopher Logan at 2:55 PM

He looks like a dirty old man to me.

Is that guy dropping a load in his dress?

May Allah guide everyone.

Weekends to peopleig2tmean that they can have a two-day wowgold4europe good rest. For example， people gameusdcan go out to enjoy themselves or get meinwowgoldtogether with relatives and friends to talk with each storeingameother or watch interesting video tapes with the speebiewhole family.
Everyone spends agamegoldweekends in his ownmmoflyway. Within two days,some people can relax themselves by listening to music， reading novels，or watchingogeworld films. Others perhaps are more active by playing basketball，wimming ormmorpgvipdancing. Different people have different gamesavorrelaxations.
I often spend weekends withoggsalemy family or my friends. Sometimes my parents take me on a visit to their old friends. Sometimesgamersell I go to the library to study or borrow some books tommovirtexgain much knowledge. I also go to see various exhibition to broadenrpg tradermy vision. An excursion to seashore or mountain resorts is my favorite way of spending weekends. Weekends are always enjoyable for me.
igxe swagvaultoforu wowgold-usaignmax wowgoldlivebrogame thsaleGoldRockU

Today,we are proud to announce the launch of the new wedding support service sell ffxi gil,packed with features sure to sell ffxi gils delight adventurers across Vana'diel looking to exchange eternal vows with their beloved!Responding to player demands for greater customization,the new service will grant brides and grooms freedom in choosing location,timing,dialogue,and sell Final Fantasy XI Gil more for their ceremony,allowing them to create a truly memorable event all their own.Information on all the features,including in-game sell ffxi gil item vendors and wedding certificates,can be found on the new wedding support site,so head on over sell ffxi gils and get started planning the wedding of your dreams sell Final Fantasy XIGil!

A pedophile, helping pedophiles, under laws written by a pedophile. Not hard to see how that would be very morally and spiritually unhealthy and damaging to everyone, not just the women. Human beings do not need this evil enslaving decent people and terrorizing little girls.

interesting blog. It would be great if you can provide more details about it. Thanks you