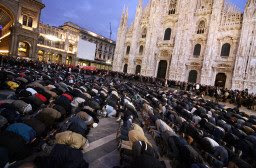 Italy one of the few Western countries that is actually fighting back against the domestic threat of Islam is showing us once again that are willing to do what ever is necessary to save their country from an Islamic take over. Two weeks ago when Muslims across the world took to the streets in anti-Israel protests, Italy was the only country that warned them to stop protesting. Now they are backing up their words by saying that new measures have been put in place to "control" future protests. Senate whip Maurizio Gasparri is taking it even one step further by calling for the possible deportations of some of the protesters.

All three incidents took place during protest marches against the Israeli offensive in Gaza, but a mass pray-in in front of the Duomo in Milan grabbed the most headlines. Interior Minister Roberto Maroni said Wednesday he was working on a directive that would improve ''control'' during demonstrations, without revealing full details of the measure.

''I have prepared a guideline that will be sent to all city prefects so that what happened in front of the Duomo in Milan will not be repeated,'' Maroni told parliament.

The minister added that his aim was to ''guarantee the right to protest but also the right of citizens to peacefully use the spaces in their own cities,'' Maroni said.

Hundreds of Muslims took part in prayers in front of Milan's Duomo on January 3 when the hour for prayer arrived during the march.

On the same day a similar incident occurred in Bologna, where hundreds of Muslims prayed to Allah in front of the Basilica of San Petronio.

In a third incident, around 50 Muslims prayed in front of the Colosseum in Rome last weekend during another protest march for Gaza. The Roman amphitheatre has close ties with the Catholic church and forms part of the Good Friday Stations of the Cross procession.

Right-wing politicians have reacted angrily to the three events, although Muslims have said they had no choice since they were obeying Islamic prayer times.

On Wednesday Bologna public prosecutor's office confirmed that the protest organiser, Mohamed Rafia Boukhbiza, will have to answer to charges of public security violations after a Forza Italia politician lodged a complaint.

According to law, police must be notified ahead of any public prayer event.

Rafia Boukhbiza is accused of having advanced knowledge of the pray-in, since many of the Muslims used prayer rugs.

In the wake of the Milan pray-in, Defence Minister Ignazio La Russa staged a Catholic mass in Piazza Duomo the following Sunday in order to ''reclaim'' the area, while the Northern League's Attilio Fontana said he ''would like to see what would happen if I went to recite the rosary in Mecca''. Maurizio Gasparri, Senate whip for Premier Silvio Berlusconi's People of Freedom (PDL) party, earlier this week said all three incidents were ''pseudo-prayers''.

''They have nothing to do with religion - they are threatening and intimidatory acts towards the Italian people,'' he said, adding that those who took part should be ''identified and possibly expelled from the country''.

A former interior minister, the PDL's Beppe Pisanu, described the incidents as ''a fundamentalist operation, the preliminaries of terrorism''.

But Milan Archbishop Dionigi Tettamanzi has refused to condemn the mass pray-in in Milan, describing prayer as an ''inalienable right''.

Link to Article
Posted by Christopher Logan at 11:41 AM

I love you blog

Thanks Pam, the feeling is mutual.

Never to forget, never to forgive to the muslim evil terror. Islam and freedom of speech don´t work. So NO islam in Europe. Watch and read mohammed T-shirt from Sweden at,
http://www.mohammedt-shirt.com
mail: mohammedt-shirt@europe.com
tele: +46735563126

Here's hoping the muslims do the usual and push the boundaries to create a ripple effect where leaders of every other stripe will finally show a spine to put these cavemen back in their boxes...