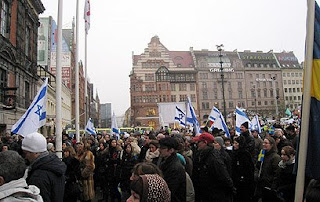 Even though Israel has stopped their military engagement versus Hamas, Jews in Western countries are still under attack. This time the attacks took place at a pro-Israel rally in Malmo Sweden.

Hat tip to The Religion of Peace


Protesters gathered to support Israel were pelted with eggs and bottles, then dispersed by police

A pro-Israel rally in Malmo, Sweden was torn apart Sunday by pro-Palestinian residents who arrived on the scene with eggs, bottles, and tear gas grenades which they threw at Israel's supporters. Police dispersed the entire crowd.

Hundreds of people took part in the rally in support of Israel, which was held at the city's main square. Elad Meier, a Bnei Akiva and Jewish Agency envoy to Sweden said it was organized by a committee of volunteers from the Jewish community and outside of it.

Protestors carried signs that said 'Stop eight years of Qassams' and 'Peace for children in Israel and Gaza'. The organizers received a police permit for the demonstration.

However, a number of pro-Palestinian protestors who did not have a permit to demonstrate took to the streets in retaliation to the approved rally. They were not dispersed by police despite lacking a permit.

"At some point, about a half an hour after the protest began, pro-Palestinian protestors began to throw eggs, bottles, and even a tear gas grenade," Meier recounted.

He added that the lawless protestors disconnected the speakers brought to the square by the Jewish community while its leader was speaking. The act brought the pro-Israel rally to an end, as others could not speak.

At this point, Meier said, police stepped in and asked the unruly protestors to leave. Officers then proceeded to clear the square of all present, including those who had received permission to demonstrate.

The pro-Israel protestors were angered by the police's conduct and lodged an official complaint stating that only those who had protested without a permit should have been dispersed.

Link to Article
Posted by Christopher Logan at 10:57 AM

And shouldn't the police have arrested the people throwing stones, eggs, bottles and firecrackers?

I am concerned police have been trained in "sensitivity" but not basic law.

The police took the easy way out, knowing that if they arrested them they would rile up more Muslims. In the end all this appeasement will just make the situation worse.

It seems that someone let the subhuman apes out of their cages, and they threw eggs, bottles, and so on. Said apes also are known for battering and raping Swedish women, because they cannot control their primitive animal impulses.

The Planet of the Apes is an apt analogy to what is occuring in the west.

At the end of the Conquest of the Planet of the Apes, the apes rampaged through the streets, overpowered the police, set building on fire and finally overtook the humans.

Instead of dealing harshly with the barbarians, civilized people were the ones who were punished. The savages achieved the goal they set out to accomplish, to stop the pro-Israel demonstration.